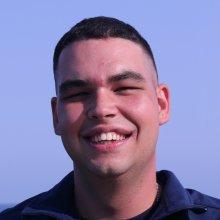 I participate in bathymetric surveys on assigned oceanographic vessels deployed around the world. Duties typically include multibeam sonar data processing, collecting oceanographic data using CTDs and XBTs, deployment and recovery of survey equipment such as ocean gliders, and monitoring survey systems on board. Previously I spent nine years as a meteorologist providing support to various Navy commands and ships, as well as time as a meteorology instructor specializing in teaching the forecasting of atmospheric effects on electromagnetic radiation.

Senior Chief Dee is my biggest professional influence on my career and is my mentor. Most things I learned about being a meteorologist came from him.

I have recently completed Unmanned Maritime Systems Tier 1 training course at the University of Southern Mississippi, leading to a building interest in the operation of AUV's within the Navy's fleet.

My only other job was working at a pet store before I joined the Navy. I signed up for the Navy while still in high school.

I enjoy playing guitar, painting and tinkering with electronics.

Learn the basics of meteorology and oceanographic before arriving at boot camp to get a head start on your naval career.