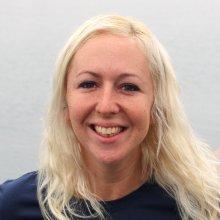 I am an artist frequently embeds in research expeditions in order to directly observe the otherworldly landscapes and critters from remote areas. I create immersive large-scale paintings of these habitats to share new research and transport viewers to worlds they might never experience firsthand. I spent three months scuba diving and camping in Antarctica as the 2014-15 National Science Foundation Antarctic Artists and Writers Awardee. I have also served as the resident artist aboard oceanographic expeditions on the RV Atlantis, RV Melville, and previously sailed on the EV Nautilus as a Science Communication Fellow, making paintings along the way. My works have been exhibited across the US and Europe.

I became an artist because I knew that it meant I could dedicate my entire career to learning, exploring, and investigating new ideas. I have always been fascinated by the deep sea as a sort of parallel universe to ours. Initially, I wanted to work with scientists to gain access to these subjects and observe them firsthand. Eventually, I began to understand that art and science were both driven by a passion for exploration and that as an artist, I could help scientists communicate their discoveries.

There were two turning points; one was learning about deep sea vents as a child, so I would have to give credit to Bob Ballard's team that first discovered riftia at hydrothermal vents. The second major influence was my high school art teacher, who taught me that contemporary art was more than making visually appealing pictures. It was about sharing information and conveying new ideas, and that making art was an intellectual pursuit.

I think the most fascinating aspect is my work with scientists. Most people view art and science as very different fields, so bringing them together always feels exciting.

I worked at a bird banding station while I was growing up. While working there, anytime I found a feather, I identified which bird it came from, and made a drawing of that bird. I think that experience really made me comfortable working with researchers and allowing their research to shape my art.

I think the key is to be authentic to your own interests and pursue them doggedly! Don't be afraid to reach out to other individuals who inspire you, whether they are in your field or working in an entirely different discipline.

Because of my ongoing work with oceanographers, I was invited to speak on a panel on outreach at the Schmidt Ocean Institute symposium in 2013. Allison Fundis also sat on the panel and shared information about the Nautilus. I subsequently applied to sail as a Science Communication Fellow. Pete Girguis was in the audience and approached me about working together. This will be my second expedition with his lab.

"I can hardly wait to paint the life forms and otherworldly habitats we find while sailing on Nautilus and diving with Hercules! It is thrilling to be able to use art to transport new audiences to that remote and mysterious universe under the water."