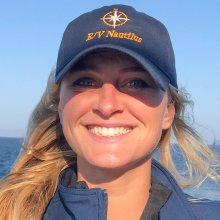 I am a graduate student through California State University, Monterey Bay and Moss Landing Marine Laboratories. I am also currently interning at NOAA’s Monterey Bay National Marine Sanctuary office. My research focuses on groundfish habitat associations on the “lost reefs” (30 to 40 meters water depth) of the Monterey Bay National Marine Sanctuary (MBNMS) and the implications for conservation and management of spatially managed species. All data for my project is collected using diver-operated stereo video and underwater visual census techniques on SCUBA.

I have always been enchanted by the sea. I grew up in the water, swimming, and surfing in the Pacific Ocean and I fell in love with the beauty and mystery every trip to the beach provided me. It was this passion that led me to study Aquatic Biology at the University of California, Santa Barbara (UCSB). I became a research SCUBA diver working for the Partnership for Interdisciplinary Studies of Coastal Oceans (PISCO) where I spent several years conducting subtidal surveys in the Santa Barbara Channel. In the years between my undergraduate and graduate studies, I have traveled extensively, exploring various subtidal ecosystems for both recreation and research.

My biggest source of encouragement has always been my mother.

The most fascinating element of my work so far has been just that, my work. I am able to spend hours underwater, exploring a world that is virtually unknown to most people. My extensive subtidal work has even afforded me the ability to travel abroad on an expedition to the South Pacific to conduct baseline surveys of the archipelago of Tonga.

While working as a Research Technician at the Marine Science Institute at the University of California, Santa Barbara I was also working as a docent at the Hollister Ranch Tidepool School, teaching children and adults about tide pool ecosystems. I was also the director of a swim program and a Junior Lifeguard Instructor, with both programs integrating ocean outreach into their curricula.

The field of marine science is becoming more and more competitive, but the first piece of advice I would give is to not give up. An incredible amount of work is required to climb the ladder, but it can be done. Students should do their best to expand their learning by taking classes outside the realm of traditional marine science classes and take classes such as GIS and statistics early in their careers. Coding and computer modeling become immensely important further along in your career as well. I found that taking time off in between my undergraduate and graduate studies helpful as well. It allowed me to gain experience both in life (traveling and working) and working in the field of marine science. This, in particular, allowed me to better understand what I wanted to focus my advanced studies on and to decide on the type of advanced degree I was interested in pursuing.

I am currently a marine science graduate student of California State University, Monterey Bay and Moss Landing Marine Laboratories. I am also an intern at the Monterey Bay National Marine Sanctuary Office where I have been afforded the opportunity to participate in the Nautilus Exploration Program.