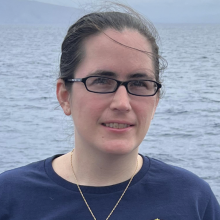 I’m a software engineer specializing in field robotics, and I primarily work with underwater vehicles. For this cruise, I will be testing a system to incrementally transfer scientific data collected by an underwater robot to the scientists monitoring it from the E/V Nautilus (and on shore!). Our goal is to enable scientists to make decisions about the robot’s mission while it is underwater, rather than having to wait for it to surface again to be reprogrammed. Communication technologies like wifi or radio don’t work underwater because seawater is very effective at absorbing those frequencies of energy. Instead, we rely on sound waves to transmit data, using an acoustic modem. This has much lower bandwidth than wifi — in bad conditions, we may only be able to transfer the equivalent of a text message every minute — so we have to think carefully about what data to send and how to handle dropped messages. I’m a bit of a generalist and particularly enjoy understanding the entire software stack required to control a robot. Other recent projects have included: building a map of the environment using imaging sonar data; camera and sonar calibration; path planning for docking; various drivers for sensors and actuators.

As a freshman, many of my friends were working on building a self-driving car for the DARPA Grand Challenge. It seemed like a whole lot of fun, so I made a point of acquiring relevant skills (programming + control theory) and joined the team as a sophomore. I’ve been playing with robots ever since.

Who encouraged you or influenced you the most?

Rather than a single person, I’ve been lucky to find mentors (and have them find me) at the times when I needed them. Some of the most influential were:
-a school librarian who noticed that I might be a good fit for a research apprenticeship at her husband’s workplace.
-a professor who let me take his class without having the required prereqs so I’d be able to contribute to the robotics project that he supervised; I worked with him for the next 3 years.
-a grad school officemate who was a lot of fun to talk about research with, and who later mentored me through the process of turning my MS thesis into an actual paper.
-a colleague a few years ahead of me who recruited me into a geophysics grad program, and later, cheered me on through writing my first NSF proposal

What other job led you to your current career?

My career has had two parallel threads — I’ve spent significant time both working on field robots (including Google’s self-driving cars and WHOI’s Sentry AUV) and pursuing glaciology/geophysics research. Ultimately, I decided that I wanted to be a software engineer building robots in service of science.

I love glassblowing -- it is a dance with gravity, molten glass, and heat that requires me to be completely focused in the moment. It doesn't hurt that it's a very physical art form that also requires a solid understanding of the physics of the material.

Get involved with real projects, via internships or summer research, as soon as possible. This is the experience that will help you figure out what you really enjoy doing, as well as being way more important to employers than the difference between an A and a B in your classes. Be willing to ask for what you want, rather than waiting for it to come to you. For example, I called up an old mentor and said “I’ve always wanted to go to Antarctica, how can I be useful?”. This led to 4 Antarctic field seasons and a MS in Geophysics. I’ve also gotten multiple job offers by saying “I’ll be in town on XX date, can we chat?” (Then make travel arrangements…)