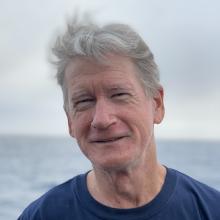 devOcean Technology provides technical support for oceanographic research and ROV operations. I have worked as an 'e-tech' in support of ROV ops, preparation and deployment of offshore instrumentation, vehicle development and vehicle build since moving to the West Coast in 1991. My first offshore gig (March 1992) was tech support for storm research (not recommended) with Dr David Farmer's 'Flying Circus'. It's been (mostly) calmer sailing since. Prior to the move, I worked in industrial controls, telecom and power supply development for a variety of companies in Ontario.

My interest in the electrical/electronic trades came out of a chance meeting with a gentleman, Robert Karn, who was developing comms equipment for the deaf (pre-Internet). I worked a summer job in his workshop and was inspired to go back to school (Ryerson Polytechnical) to learn the trade.

With my shiny new Electrical Technologist ticket from Ryerson, I went to work for Bob Karn at Acutec Electronics. Bob taught me that you can enjoy 'work', have fun and get paid for it. Still doin' that.

Working in support of underwater vehicles, I have had the opportunity to see subsea environments, creatures and communities that are beyond fascinating - sometimes being among the first ever to see them.

In Ontario, back in the day, I worked in telecom, power supply design and industrial controls. When I moved to Vancouver Island, I wasn't finding much industrial control work available. During a visit to the Institute of Ocean Science at Pat Bay, I had occasion to examine an instrument (aka 'Suzy') that was set for deployment offshore. It had sensors, actuators, data storage, comms - all managed by a micro-processor. Revelation. It was an industrial control system in a can. I started looking at local firms doing that sort of work, found a job with Oceanetic Measurement Ltd and headed off in a new career direction. On loan from Oceanetic to the Canadian Scientific Submersible Facility, I had the opportunity to work on a ROV for the first time. That led to the founding of devOcean Technology Ltd. and I have been doing support for offshore research, free-lance since then.

Within the subsea industry generally, and especially locally, it's fair to say 'everybody knows everybody'. Josh Chernov, a longtime acquaintance, called me to ask if I would be interested in helping support a science cruise with OET. Bit of a howl-around with the COVID thing lurking everywhere but it sounds like they're taken every reasonable precaution. ...so yes, I would.

There are places now where you can go to 'learn ROV' but most of the people I know who do that work have a grounding in other fields - mechanical or electrical technology, IT or navigation. It still seems to be a field where the jack of all trades (with one core competency) is an asset. Congeniality is a must. You have to work at close quarters for long periods of time under stressful conditions without making the people around you wish your weren't there - or you won't be next time. Don't be afraid to learn. It takes courage. First you have to admit there is something you don't know. There are always new technologies, new instruments and people around you who have skills and experiences that are different from your own. Make use of that. ...and RTFM.