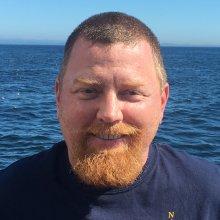 In 1996 Kevin received a B.S. in Biology/Environmental Science from the University of Wisconsin-Eau Claire. Kevin then served two years as a Peace Corps volunteer teaching high school science in the Solomon Islands. After returning from the Peace Corps he worked as a Fisheries Biologist with the Florida Fish and Wildlife Conservation Commission conducting fisheries-independent monitoring along the Florida panhandle.

At various points in his career, Kevin worked as a Fisheries Observer in Alaska, assisted NOAA's Northwest Fisheries Science Center in developing Community Profiles for West Coast and North Pacific Fisheries, and assisted in a pilot study to develop survey methodology and a sampling strategy for assessment of coastal shark populations.