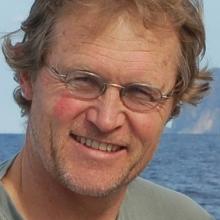 Kevin is currently the Director of the Geological Resources Division at GNS Science (equivalent to the USGS). He has been involved in exploration and study of active submarine volcanoes along the Kermadec Arc (north of New Zealand) since 1999, in addition to his other research on NZ ore deposits and gas hydrates. In 2007 he participated in a water-column and seafloor mapping study of the submarine volcanoes of the Aeolian Arc, in the southern Tyrrhenian Sea, aboard the R/V Urania, so he is very excited at having a closer look at the volcanoes using the ROVs onboard the Nautilus.

Kevin graduated with a degree in geology in 1992 and completed a MSc and PhD in 1989 and 1993 in the Department of Geochemistry, University of Cape Town, in South Africa.