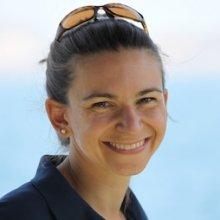 Dr. Katy Croff Bell is an ocean explorer, using deep sea technology to explore what lies at the depths of the ocean. For more than fifteen years, she has participated in or led more than 30 oceanographic and archaeological projects.

Katy received her S.B. from MIT in Ocean Engineering in 2000. In 2001, she was a John A. Knauss Marine Policy Fellow in the NOAA Office of Ocean Exploration, after which she completed her Master's degree in Maritime Archaeology at the University of Southampton. Katy completed her Ph.D. in Geological Oceanography at the University of Rhode Island Graduate School of Oceanography in 2011. She is a 2006 National Geographic Emerging Explorer and 2014 MIT Media Lab Director's Fellow.