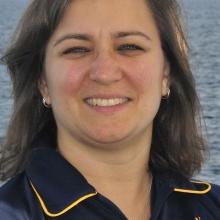 Katrina Linthorst Homan's passion for Geology began in high school while on trips that one of her teachers led to National Parks in the western United States and Alaska. She received her bachelor's degree in Geology from Colgate University and went on to the University of Massachusetts, Amherst for her master's degree in Geology. She was awarded her master's degree in 2000; her research focused on the mineral chemistry of Mauna Loa volcano in Hawaii. She worked for several years in outdoor and experiential education which included teaching rock climbing and white water canoeing as well as being a raft guide and a ropes course instructor. During this time, Katrina also worked for two non-profit educational organizations that enabled her to work with homeschooled teenagers and to teach high school geology in Zermatt, Switzerland. Following these experiences, Katrina began working at Choate Rosemary Hall (an independent boarding school for grades 9-12 in Wallingford, CT) in 2004. Her current responsibilities include teaching physics and geology, running a large dormitory, and overseeing the Environmental Sustainability Program for the school.