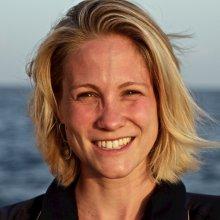 Kat Cantner is the science illustrator for the American Geosciences Institute which plays a major role in strengthening geoscience education and strives to increase public awareness of the vital role the geosciences play in society's use of resources, resilience to natural hazards, and the health of the environment. Kat's Master's research focused on Kolumbo submarine volcano near Santorini, Greece and she remains passionate about marine geology and exploration.

Kat Cantner graduated from Brown University in 2006 with a degree in Geological Sciences and Old World Archaeology and Art. She completed her Masters in geological oceanography at the Graduate School of Oceanography, University of Rhode Island in 2011. In 2012, she completed a Master's Certificate in science illustration from the California State University Monterey Bay, Science Illustration Program.