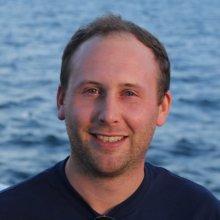 I specialize in ROV operations, telemetry upgrades, general maintenance, and mobilization. I focus mostly oceanographic science ROV missions and have specific expertise using ROV's to maintain Ocean Network Canada's scientific nodes, platforms, and experiments in the northwest region of the Pacific Ocean. Every year all of their experiments need to be brought back to the surface from the sea floor and/or deployed to the sea floor. A large part of my job is to use an unmanned robotic submarine to do just that for them, recover, deploy, and plug in their scientific instruments. I come aboard the ship and operate the submarine from the surface of the ship, and fix the ROV if it breaks. My background is in electronics and I originally started out my career as an electrician working in industrial construction in Vancouver.

Ever since I was a kid, I loved building things and solving problems, which I feel is approximately 90% of my job as a science-oriented ROV pilot/technician. My interest in the electronics side of ROV maintenance comes from a long line of electricians and electronics specialists on the paternal side of my family. I was introduced to ROV's and electronics at a young age by my father who had worked in the field almost his entire life.

While it was my mother that encouraged and helped me to start my apprenticeship as an electrician, my father has influenced me the most, especially career-wise. He pretty much taught me everything I know about ROV's, got me my first job piloting and working with them, and without him, I would most definitely not have stumbled into this career that I love. Both of my parents have always preached that loving what you do for a living is one of the most important aspects in anyone's life and encouraged me to do what makes me happy. I am extremely lucky to have been introduced to a job that I enjoy so much.

Recently I was able to fly an ROV over 2 kilometers underwater to explore hydrothermal vents on the seafloor of the Pacific Ocean. The experience was incredible, and unlike any I will ever come across again. The ocean is such an unexplored place still, and the opportunities to experience fascinating phenomena seem endless.

My previous job as an industrial electrician provided me with much of the knowledge base I use for ROV maintenance. Not only did my 5-year electrical apprenticeship teach me the skills I need to be able to fix ROV's, but it also showed me that a strong work ethic is the most important part of any job.

I love playing team sports, mostly hockey and a bit of basketball. If I had more time I would play them all. I would put traveling on par with sports as far as my favorite hobbies go.

I suppose I would say that to work with ROV's you first need to learn how to fix them. There are few avenues you could take to do that, as there are many different parts to any ROV, so I would encourage an education, as hands-on as possible, in the field of electrical/electronics, or mechanical/hydraulics. You could start anywhere from an apprenticeship to an engineering degree. After that, you just have to look around for a starting ROV job and work as hard as you can.

The Nautilus Exploration Program has been contracted by Ocean Networks Canada to continue maintaining their science experiments and conduct research in June 2017. ONC referred me to the head of OET's ROV program, who in turn has hired me to be one of the ROV Pilots for said cruise in June.