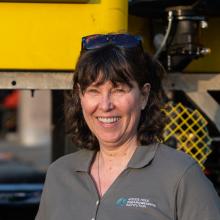 I study biological attributes of foraminifera because they are common, diverse, and nearly ubiquitous in the ocean and have a very long fossil record, likely back to the Precambrian (>540 million years). I specialize in benthic forms of this protistan (single-celled eukaryote) group, seeking to understand their ecology, physiology, cell biology, and most recently, metabolism. I mostly focus on chemocline habitats occurring in silled basins and cold seeps/methane emission sites because these habitats are analogs to early Earth ecosystems. My research includes both fieldwork (seagoing collections and experiments) as well as laboratory-based studies, some of which are experiments lasting many months. I have been a Chief Scientist on 22 oceanographic cruises, sampling in the eastern and western Pacific, Northern Atlantic, Caribbean, Mediterranean, Black Sea, and the Antarctic. I have logged nearly 200 SCUBA dives under Antarctic sea ice and have conducted research for extended periods in Norway, France, Denmark, and Japan.

Growing up on a lake, I learned to swim at an early age, spending much of every summer day on or in the water. I was always intrigued by the denizens of the murky depths and when one very large fish visited me after a water skiing fall, I vowed to learn more about those “scary” denizens.

Although foraminifera is supposedly aerobes, some foraminiferal species thrive in the most hostile “stinky” (hydrogen-sulfide enriched) sediments of the Santa Barbara Basin, where they can be two to three orders of magnitude more abundant than in typical well-aerated sediments. Ever since discovering these high abundances in the 1980s, one particular species has piqued my interest because it is full of chloroplasts even though it lives deeper than 500 m, where very little light penetrates. Our recent research has revealed great insights into the biology of this foraminifer, but we still have more things to learn, so we are continuing our studies of this species during this cruise.

While my career has always involved academia, my disciplines have varied widely over the decades. I began as a geologist and micropaleontologist, then transitioned to ecology and biological oceanography during my PhD studies and then to cell biology for my postdoctoral research. After a very short foray into ecotoxicology, I decided to focus on biology to gain insights into the abilities of foraminifera, especially in “hostile” environments, because such knowledge will help interpretations of fossil foraminiferal records.

If you want a career in ocean sciences, then you should learn as much basic science as possible, noting that ocean sciences are the epitome of multidisciplinary research. While you might envision being a biologist, there likely are chemical reactions and/or biophysical processes critical to your topic of interest. Of utmost importance is that you select a discipline for which you are truly passionate, for then it may always fascinate you.

How did you get involved with the Ocean Exploration Trust? How did you become part of the expedition team?

I learned from a colleague that Nautilus / Hercules would be off Southern California in 2021, so I decided to write a proposal to use the ship for our research, which has been focused in Santa Barbara Basin episodically since the 1990s. The proposal was funded by NASA, so here we are.