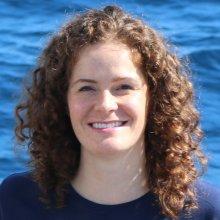 My research investigates the aqueous and volatile geochemistry and biogeochemistry of seafloor hydrothermal vents. These systems link fundamental geologic and biological processes that sustain microbial life in the largely unexplored deep subsurface biosphere, and they represent modern analogs of environments that may have played a critical role in the origin of life on the early Earth. I use geochemical tools to reveal the origin of carbon and sulfur-containing compounds in deep vent and mine fluids. Are these compounds generated by living things, or can they form without any contribution from life?

I became a geochemist because I wanted to travel to new places after finishing college. Little did I know when I started graduate school that my work would take me to the seafloor in 3 different oceans over the course of the next decade. I started off in the tropical Pacific, then shifted to the Atlantic Caribbean and recently sailed north into the Arctic Ocean. There's no place on Earth that is more 'new' to humankind than the seafloor because we have explored less than 5 percent of our ocean.

My first graduate advisor, Dr. Karen Von Damm (UNH), pulled my application out of a stack of many, including more qualified potential candidates. She called me up at home and - sight unseen - invited me to join an expedition to a volcanic system that had just erupted, exceeding my wildest hopes in one conversation. I continued to develop a deeper understanding of hydrothermal systems after continuing on to work with Drs. Jeffrey Seewald and Christopher German (WHOI) during my Ph.D.

My favorite days are when I am the first one to make a new measurement, in an unknown system. I'm the first, and only, person to ever have this particular bit of knowledge, and that is what propels me forward to learn more.

My first job in college was a credit card sales telemarketer. I am kind to (most) courtesy callers. I also learned a lot about how to keep a person on the line who badly wants to hang up. Never underestimate the importance of marketing!

I love spending time with my family - my husband is also an oceanographer - and being outside. Hiking, biking, scuba, and enticing new birds to the backyard.

Study a 'classic' basic science before becoming a specialist in marine science, such as physics, chemistry, or biology. Competency in computer skills (programming, modeling, GIS) is also paramount in my career. There's more than one pathway to get the job you want - and often more than one career that would suit you. Be open-minded and continually keep an eye on the 'target' job market that you envision for yourself, even if you're years away from applying. These advertisements describe what you need to learn to get a similar position in the future.