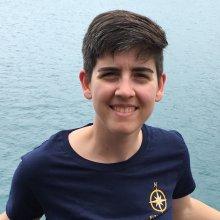 I am a graduate student interested in the chemical evolution of magmas and what they can tell us about the earth's interior. The chemical composition of volcanic rocks can tell us a variety of things about what is taking place beneath the Earth including the conditions of the rock when it first melted, what happens as a magma travels through the Earth, and how long it took for magma to reach the surface. I primarily work in a lab where I prepare my specimens for analysis by polishing them until they are very thin and I then bombard them with electrons, pass infrared and x-ray radiation through them, and finally ablate them with a laser in order to know their chemical composition. I then use this information to understand what is happening beneath the Earth.

I’ve always been interested in the arts and sciences; however, I didn’t know about the geosciences until I decided to go back to school in my mid-20s. I took a geoscience class and realized that the geosciences combine my two interests. Because I’ve always found volcanoes fascinating, I chose to participate in volcano-related field camps as an undergraduate and these experiences solidified my desire to learn more about volcanic processes as a graduate student.

The professors and mentors I’ve had since returning to school to be a geoscientist. They’ve encouraged me to learn as much as I can and grow as a scientist.

That something so small can tell a big story. One of the things I study is olivine-hosted melt inclusions. They are these tiny, microscopic pockets of melt which were trapped inside olivine crystals while those crystals were growing in a magma chamber. They offer a look at what might have been taking place earlier in a magma’s history than what surface rocks can tell us.

As a second-year graduate student, I’m still early in my scientific career. The art-oriented jobs I had prior to switching over to the sciences helped me hone my visual-spatial reasoning and observational skills. I still draw from those experiences when working in a lab. As an undergraduate, I worked as a laboratory assistant and became familiar with how a lab runs. As a graduate student, I’m gaining a deeper appreciation for what goes into scientific research and am learning how to bring all my skills together in order to become a successful scientist.

I love cooking and baking. A lot of my free time is spent thinking up what I want to make next. I also really enjoy playing video games, creating art, and hiking.

I learned about the program through my advisor who had heard about an opening through her colleagues, expressed an interest in joining, and was invited to participate. I’m excited about this opportunity.

It’s never too late to get involved in what you’re passionate about, seize every opportunity that becomes available and keep an open mind. You never know when that new thing you try will lead to an exciting career.