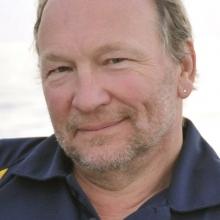 Jeff Karson will help direct efforts to explore and map key areas of Gorringe Bank, an uplifted mass of oceanic crust and upper mantle. Exposed mantle peridotites in the area are potential host rocks for exotic hydrothermal vents driven by active hydration reactions (“serpentinization”) similar to those found at the Lost City Hydrothermal Field on the Mid-Atlantic Ridge.

With extensive experience both on land and the seafloor, Jeff focuses on the geology of the oceanic crust and how it is created at mid-ocean ridge spreading centers. He investigates the relationships between faulting, magmatic construction and hydrothermal activity in oceanic crust, ophiolites, and magmatic rifts and rifted margins. Much of his recent work has been focused on spreadingrelated processes in Iceland. He is the Jessie Page Heroy Professor of Geology and Chairman of the Department of Earth Sciences at Syracuse University.

Jeff received his BS (geology) from Case Western Reserve University in 1972 and completed a PhD at the State University of NY at Albany in 1977. He was a postdoctoral investigator at the University of Toronto from 1977 to 1979 and at Woods Hole Oceanographic Institution from 1979 to 1981 where he remained on the scientific staff till 1986.