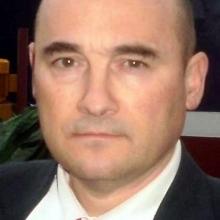 Javier Cristobo is a biologist on board Nautilus.

Javier has studied marine sponges since 1987, when he defended his PhD thesis about shallow-water sponges of the Galician coast (NW Spain). Being a professional scientific diver he shares his time as Director of the Oceanographic Centre of Gijón with functions as research zoologist and benthic ecologist in the Spanish Oceanographic Institute, specialized in Porifera (sponges).   Javier has had the opportunity to investigate in the deep-sea fauna of several parts of the world in areas such as the Iberian Peninsula (Ecomarg project), Patagonia, the North Sea, the Cape, Namibia, and Guinea Basins in the western coast of South Africa under the diva project as well as in the Antarctica where he was five times and directed a PhD thesis about sponges of these waters. In his career as a scientist prior to his current position as director, he held the positions of a Professor of Marine Biology in the Underwater Scientific Diving School of Galicia, Professor of the Galician Institute for Aquaculture Training. Xunta de Galicia, Professor of Aquaculture of Vigo University, Scientific and underwater camera for Spanish Television (TVE), Scientist in the Institute of Aquaculture of Santiago de Compostela University, head of the Marine Biological Station in the same University and Senior Researcher at the Spanish Oceanographic Institute, specializing in Benthic Ecology.