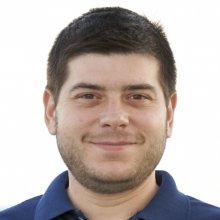 Scientist
Geological Officer
Cyprus Geological Survey Department
Dr. Iordanis Dimitriadis is working as Geological Officer at Cyprus Geological Survey Department. He is working in Geophysics and Seismology Section of the Department. During his PhD thesis, he has participated in several national and European research projects, mainly, in the field of seismology and geophysics, including seismic hazard assessment, site effects, satellite-based seismic monitoring system, installing and operating micro-tremor monitoring arrays. Furthermore, he visited the “Instituto Andaluz de Geofisica” of the University of Granada (Spain) during the period October-December 2004, where he collaborated with professors J.M. Ibanez and G. Alguacil. During his visit there he has worked upon the subject of seismic signal classification (such as, VT-events, LP events, tremor and volcanic explosion earthquakes). In 2006, he participated in the scientific cruise P338 of the RV “Poseidon” in the broader area of the Santorini volcanic center. This scientific cruise consisted part of a research project of the “Institut fuer Geophysik” of University of Hamburg (Germany). Dr. Dimitriadis had developed and used various algorithms using mainly FORTRAN and MATLAB in order to locate earthquakes, to determine source parameters, fault plane solutions and stress patterns, to estimate travel times and magnitudes and to study the P and S wave 3-D velocity structure by inverting non-linearly travel times. Dr. Dimitriadis was a member of the EGELADOS working group, which has conducted a passive seismic experiment in the Hellenic Subduction Zone within the framework of the Collaborative Research Center at Ruhr-University Bochum. Besides scientists from Ruhr-University Bochum, several scientists from universities and research institutions from Greece, Turkey and Germany collaborate within the project. Furthermore, Dr. Dimitriadis worked as a teaching assistant at the Aristotle University of Thessaloniki from 2005 until 2007 and as a visiting professor in the Cyprus University of Technology during September-December 2010.