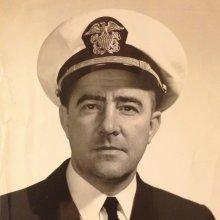 Commander EDWARD R. ETTNER, SR. (retired), a distinguished Navy officer, has firsthand knowledge of USS Bugara, having served as Executive Officer and then fleeted up as a lieutenant to be Commanding Officer of Bugara in 1956.  Commander Ettner began his 27-year naval career in 1942, during WWII.  He served as an officer on destroyers before joining the Submarine Force in 1947 and would go on to serve on the submarines Scabbardfish, Perch, Razorback, Cabezon, Caimen, Seafox, and Bugara.  Commander Ettner’s accomplishments in the navy are numerous and distinguished. In 1957, he successfully conducted the first “Hunt-to-Exhaustion” exercise to test Western Sea Frontier’s Antisubmarine Warfare capabilities against a diesel submarine; commissioned the Polaris Weapons Facility in Charleston in 1960 as head of the weapons department with responsibilities for ten divisions; received the Navy Commendation Medal for Heroism in 1961; and assumed command of COMSUBDIV-63 in 1965 and in 1966 was assigned to SACLANT as Submarine Nuclear Weapons planning officer.  Commander Ettner retired from the navy while on the staff of the Director of Navy Technology, as deputy assistant for Undersea Warfare Intelligence in 1969. Mr. Ettner continued to work as a civilian in Naval Intelligence until 1999, after 58 years of Federal service.