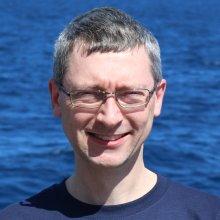 I have been working in Television and Video Production for almost 25 years, starting when I was a student at the University of Washington. I now mainly work on corporate meetings and events across the U.S. as a Video Engineer, and sometimes also as a Video Director. Video Engineering requires planning, wiring, and troubleshooting video systems; for temporary or permanent installations. For the last 15 years, I have specialized in temporary systems, which are set up for a few days to a couple of weeks, for a specific project. I enjoy the challenge of engineering, it is sort of like a giant puzzle of video equipment that I have to make work.

When I was seven years old I saw Star Wars and decided that I wanted to work in the film industry doing special effects, hopefully for Industrial Light and Magic. I played around with my parents' Super 8 film camera a bit as a teenager, mainly doing small animation projects with toys or Lego. When they bought a video camera in 1989, I started to experiment with that. Once I was in college, I studied film, photography, and broadcast journalism. I also did three video related internships and was lucky enough to get hired by the final company, which did recreations and special effects for broadcast shows. It wasn't Star Wars, but I did get to build UFOs and do Alien Abductions, among other supernatural things. The company dissolved three years later, but it was great fun while it lasted.

I have been involved in a variety of projects over my career, but my favorites are the ones for a good cause: medical research, fundraiser auctions for charities or hospitals, and anything that benefits children.

I often tell people that to me, my job is like having a paid hobby. I love video production. And when I'm not working on a project, I like to research new gear. I also like to spend time with my family, and travel.

If you want to have any type of job in film or video, there are so many ways to get experience and information: classes, online training videos, and many companies place their equipment manuals online now. An inexpensive video camera or cell phone, and a laptop for editing are all that is needed to get started. Practice, practice, practice. Recruit your friends and family to help. One of the things that may not be as obvious to someone starting out is that networking equipment is playing a huge role in video production. Being able to do some basic networking is helpful in general, but it is becoming critical for video engineers to be able to set up a network, to connect and control many of the pieces of gear.

While working part-time at the University of Washington's video department over the last 25 years, I have been involved with many interesting projects. Among them was a live broadcast of an expedition to the underwater volcanoes of the northeast Pacific Ocean in 2005, called Visions '05. I was at the UW's studio in Seattle for the downlink and studio portion of that event and had been waiting ever since then for my chance to be on the transmitting end of another expedition. When I was offered a chance to join the Nautilus team by Ed McNichol, who was also involved with Visions '05, I jumped at the opportunity.