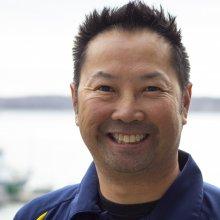 As the Director of the Pennington Marine Science Center, it's my responsibility to ensure that we fulfill the center's mission to provide Education, promote Conservation and inspire the Exploration of the ocean. The center was established at Camp Emerald Bay in 2004 by the Pennington family in memory of their son Tim, an Eagle Scout and aspiring marine biologist. Every day we focus on honoring his memory by teaching the more than 13,000 kids who travel to Catalina Island about the ocean and how intertwined and important it is to our survival. We introduce them to ideas such as science literacy, sustainability and the conservation of species and habitat. Besides teaching, I love being able to explore the ocean by diving and piloting our remotely operated vehicles (ROV's). We get out several times a week to search for the Giant Sea Bass (Stereolepis gigas) and survey reefs located in or nearby Marine Protected Areas (MPA's) at depths ranging from 130 to 350 feet. The center is also a partner in the work to restore populations of Green (Haliotis fulgens) and White abalone (Haliotis sorenseni) to Southern California.

Like so many other kids of my generation, I was captivated by the Undersea World of Jacques Cousteau and Mutual of Omaha’s Wild Kingdom. I spent countless hours dreaming of being a member of Cousteau’s team as he explored the ocean on Calypso or riding in a dusty jeep alongside Marlin Perkins and Jim Fowler on one of their adventures. I suppose in many ways you could say that I never woke up. Those dreams have acted as a guide for me on my journey and inspired me to get my diving certification which in turn gave me the chance to become a scientific diver which allowed me to participate in research such as blue water diving for planktonic foraminifera and surveying rockfish on the oil platforms in Santa Barbara. Afterwards, I spent a nearly 20-year career in the public aquarium profession during which I was a member of the teams that built the Aquarium of the Bay and both the temporary California Academy of Sciences at Howard Street and the permanent facility in Golden Gate Park. Strangely enough, perhaps my greatest adventure from those years took place in the steamy rainforests of Trinidad and Tobago and Costa Rica where I was a principal involved in tracking, collecting and exhibiting a live colony of army ants along with my friend and teammate Jim Evans!

My parents and grandparents have been my major influences on a personal level. They impressed upon me my core values of honesty, hard work, and determination. My mother was a technician at NASA’s Moffet Field and was a part of the original space shuttle team. One of my fondest memories is sitting in the cockpit with one of the pilots. On a professional level, I was lucky to be mentored by Shane Anderson at UCSB and Marsha Englebrecht, my first Curator at UnderWater World, San Francisco which is now the Aquarium of the Bay.

Exploring the ocean off Catalina in search Giant Sea Bass and never before seen mesophotic zone reefs with our two mini-ROV's, the OpenROV Trident and the Blue Robotics bluerov2 is really what I find most intriguing at the moment. I hope what we discover with them will serve as a springboard to exploration in person using rebreathers and diver propulsion vehicles (dpv's).

I've been fortunate to have a number of jobs in my life which have helped me get where I am today beginning as a newspaper boy in grade school which taught me responsibility, how to manage money and forced me to get up early every morning. Other very important positions I've held through the years are: undergraduate lab assistant for various ecology labs; Scientific diver with experience doing transects, underwater video, kelp forest surveys, blue water diving for planktonic foraminifera and jellyfish; Laboratory Technician for a paleobiogeochemistry lab; Administrative Assistant to the Diving Safety Office; Specimen Collector for UC Santa Barbara, Aquaculture technician working with Red and Green abalone, Aquarist and Diving Safety Officer Underwater World San Francisco (aka Aquarium of the Bay); Senior Biologist, Steinhart Aquarium and Diving Safety Officer, California Academy of Sciences.

I enjoy the outdoors and living on Catalina Island at a camp affords me plenty of opportunities to hike, mountain bike, paddle board, and kayak. I would normally list fishing and scuba diving as hobbies since I enjoy both, but I dive and fish for work on some of the best spots around the island. I like reading and usually have multiple books in the queue. At the moment I am reading Jill Heinerth’s The Basics of Rebreather Diving and Robert Jordan’s Wheel of Time series. I’ve also been working on having a smaller carbon footprint and reducing the amount of plastic I consume. I use an insulated reusable water bottle, carry my own utensils which I use for meals and living at a camp allows me to walk to work every day. I’d love to learn to play an instrument and am thinking of getting a guitar. Suggestions appreciated!!!

I've been following the E/V Nautilus and the Corps of Exploration since 2012 when I first learned of NautilusLive at a National Marine Educators Association (NMEA) Symposium. Since then we've had expeditions playing live on screen while we teach Scouts and other students about Oceanography. During the Summer we've organized a few live interactions with the E/V Nautilus which were truly fun and inspiring for both the kids and myself. The Live Interactions with the Science Communication Fellows and the crew were what motivated me to apply. This will be my first time on E/V Nautilus but my second time having applied so as the saying goes, "If at first, you don't succeed, try try again!"

I tell the staff and interns to follow your heart and do what you love. However, I also say work hard but most importantly work smart and plan ahead. I have a 2 - 3-year plan with achievable goals as well as 5 and 10 year plans so that I'll have a guide and benchmarks that allow me to measure my success and re-calibrate my goals. It's really important to develop good working characteristics such as positivity, punctuality, work ethic, integrity and the ability to work in teams as both a leader and a supportive teammate. Just as importantly, have faith, dare to dream and don't be afraid to take chances when an opportunity presents itself. Be true to yourself, be good to others and remember good friends made along the way are what makes the journey both worthwhile and what we remember most.