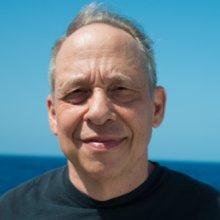 I work in robotics research. As part of that work, we design, develop, and operate robots for scientific applications. Robots I've worked with in the past include WHOI's Jason ROVs, ABE, Sentry, Nereus, and NUI. On this expedition, I'll be the expedition leader for the Mesobot group. Mesobot is a robot designed for midwater exploration. My role will include coordination with our science users, design of the dives, mission programming, real-time monitoring, and post-dive data analysis.

My family has always been attracted to the sea. My parents grew up sailing and my father was a shipbuilder. I went on to study underwater robots as a PhD student at MIT. While I was a post-doc in the early 80s, my advisor invited me to meet with a guest from Woods Hole Oceanographic, Robert Ballard. Need I say more? Bob recruited me to join his group at WHOI and I've been there ever since.

My parents, no doubt. I also had some great teachers in high school and in college in science, math, engineering, and the arts. On my second cruise with Dr. Ballard in 1985 we found Titanic. I have benefited enormously from my collaborative relationships with engineers and scientists from WHOI and other institutions from many countries (UK, France, Germany, Norway, Portugal, Japan, and China). Other scientists called my ideas "stupid" and considered our early robots "useless junk". I was sure we were right and those criticisms only motivated me more. We converted many of those scientists with our revolutionary results, like our first detailed maps of deep-sea spreading centers we made with our ABE robot. Some of those skeptics started writing excellent proposals that enabled us to take our robots to sea and make great discoveries.

I think the most fascinating aspect of my work is the interactions between scientists and engineers. This is very much a two-way exchange. I like to think we take turns leading each other. Sometimes scientific requirements lead us to invent a new technology. Other times a technological concept leads to new ways of thinking about science. When I started, many scientists had no faith in remotely operated vehicles (ROVs) or autonomous underwater vehicles (AUVs) and considered my work a waste of money. A few, like Dr. Ballard, were aggressively trying to carry us into the future. Seeing that whole story unfold has been truly fascinating. Can we imagine deep sea science and exploration without ROVs and AUVs?

My job at WHOI is the only "real" job I've ever had. I had part-time and summer jobs in the Ocean Engineering group at Draper Labs, where I learned a lot (mostly I discovered how much I had to learn to actually do something in the ocean). As an undergrad and graduate student at MIT, I learned how to make things work and function as a member of a team. I spent the first few years at WHOI "learning the ropes" before I could start making meaningful contributions.

I hold Bachelors, Masters, and PhD degrees in Mechanical Engineering from MIT. I was named a Fellow of the IEEE in 2021.

I walk in the woods almost every day. I like birding and I go cross-country skiing whenever I get the chance. I love my work so there's lots of crossover between my work and my personal time. I like learning about all branches of science. I enjoy music and aspire to play the guitar. I have 4 children and 5 grandchildren. I am very proud of all of them and I enjoy spending time with them.

I have worked with Dr Ballard for nearly 40 years, first at Woods Hole Oceanographic Institution and now with OET. WHOI, University of Rhode Island, OET, University of New Hampshire, and University of Southern Mississippi have a cooperative research program (OECI) funded through NOAA's Office of Ocean Exploration. As our OECI plans were evolving, my collaborators and I introduced Dr. Ballard to our emerging Mesobot technology and we were invited to join the OECI effort.

If you want a career working in and around the ocean, you can get there through many paths. The sciences are an obvious route but opportunities in engineering are even more abundant in my experience. Technical specialties like electronic circuit design, electrical power systems, mechanical design, mechatronics, and computer science can take you to a career in the ocean quicker than you might expect. OET does a great job of illustrating these opportunities to young people.

Unexpected discoveries are the best!