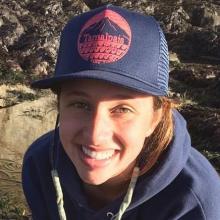 I support staff at advancing marine resource management planning, policies and strategies, through research and writing, working closely with the sanctuary’s deputy superintendent for programs

Before this fellowship, I specialized in pinniped (seal and sea lion) and marine wildlife ecology, population dynamics, and spatial modeling to serve effective management of coastal systems

My interest in pinniped research developed during my undergraduate education at University of California, Santa Cruz working at the Pinniped Cognition and Sensory Systems Laboratory and the Vancouver Aquarium through the University of British Columbia, Marine Mammal Research Unit, and Open Water Research Laboratory. I supported researchers in investigating the hearing thresholds of Arctic ice seals, and population decline of Steller sea lions and northern fur seals respectively. Through these experiences I acquired skills in marine mammal research and experimental design in a captive setting, and also developed an interest in working in the field with wild populations. Following captive pinniped research experiences, I transitioned into field work, and have held positions for state, federal and non-profit agencies. I have worked as a field technician on the remote Southeast Farallon Island working on long-term pinniped demography of California sea lions, northern elephant seals, Pacific harbor seals, northern fur seals and Steller sea lions. I have also participated as a technician on the remote Pribilof Islands in the Bering Sea of Alaska, investigating the population dynamics of northern fur seals and Steller sea lions with the National Oceanic and Atmospheric Administration Marine Mammal Laboratory.

I received my master’s degree in Natural Resources (option: Wildlife) where I worked as a fully funded graduate student in the Quantitative Population Ecology Laboratory at Humboldt State University. My master’s thesis research focused on spatiotemporal overlap between seabird, pinniped and human use to better predict timing and locations of disturbance events on the north coast in Trinidad, California. Upon receiving my degree, I worked full time with the BLM as the coastal biological science technician, specializing in seabirds and pinnipeds. I collected and managed long-term pinniped monitoring projects while concurrently directing 30 citizen scientists and serving as the lead elephant seal biologist on the north coast.

Throughout my academic career and professional development in the past decade, I have continued to prioritize community engagement, public outreach and STEM education. In addition to many years of K-12 marine science education, I have also had the opportunity to work with hundreds of undergraduate students including those from underrepresented groups.

I think the people I have worked with since beginning ten years ago in this field inspired me and encouraged me the most. Especially working with accomplished strong women holding leadership roles in the field and the lab.

Learning more about community engagement right now in the fellowship is inspiring me!

Many jobs from ranging from a pinniped trainer to bioacoustician to behavioral scientist to Co Principle Investigator to grad student to spotted own biologist to elephant seal pup demographic field lead --- lots of twist and turns! But mostly remote pinniped field biology positions. Also spend over 6 years leading STEM educations programs on the central coast.

How did you get involved with Ocean Exploration Trust? How did you become part of the expedition team?

As a state fellow interested in both ecology and education, helping support the OET team while interpreting questions from the public was why I was invited by another scientist to help.

Tidepooling! I also love baking and cooking delicious meals in my kitchen. Also playing with my 8 pound Pomeranian, "Moby" (yes, named after Moby Dick, it's ironic)

Follow your passion. Life is waaaaaay too short to not do something you absolutely love. I have moved about 20 times, have over a dozen different jobs, and have met some incredible people. All of it has made my professional career enriched, interesting, and full of adventure.