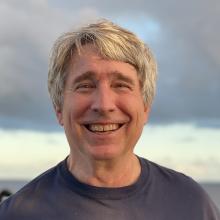 My primary research interest is in the field of deep water landscape ecology, which ties together biology, geology, and geography. Different types of seafloor clearly affect the location and composition of different benthic communities. In particular, I am fascinated by seamounts and how their different topographic features (summits, ridges, pinnacles, canyons) and substrate types (rocks, sediment, cobbles, manganese crusting) influence the location and composition of invertebrates and fishes that live on them. In order to study this, I have had to acquire at least a general knowledge of all the different types of deep-water animals that live on or near the seafloor, the geologic processes that create seamounts, and how seamounts are mapped and visualized using multibeam sonar and GIS (Geographic Information Systems). With respect to deep water animals, I am particularly interested in glass sponges, which have fascinating microscopic structures. These sponges, in my opinion, are the most problematic group of animals living on the deep seafloor since they come in all different sizes and shapes (which can be very confusing) and there are many, many undescribed species. I am trying to learn enough about their taxonomy to help sponge taxonomists with this problem.

I grew up in a family of geologists and had a pick in my hand before I ever had a dog or cat. Often times after school, you would find me down in stream beds around Pittsburgh, Pennsylvania digging through coal shales in search of fossil plants and fishes. I was also a big butterfly collector so I was interested in both geology and biology from an early age. I convinced my whole family to take scuba diving lessons when I was 12, and spent weeks every summers diving and snorkeling off the east coast where my grandparents lived. In college, I decided to major in biology, met my wife in the Peace Corps in West Africa, and we later moved to Hawaii to pursue graduate degrees and be close to the ocean. In 1997, I did my first submersible dive and from that point on, was completely hooked on the deep sea.

One of my biology professors during my bachelor's degree really got me interested in ecology. I also had an opportunity in graduate school to live for a week in the undersea habitat Hydrolab down in the US Virgin Islands, conducting saturation diving to study angelfishes. My co-lead on this cruise was responsible for that. Later, when I started diving in submersibles with Terry Kerby, the chief pilot for the Hawaii Undersea Research Laboratory (HURL) at the University of Hawaii, I clearly knew that this is where I wanted to be, thousands of feet below the surface on incredible landscapes and seeing weird animals that no one had ever seen before. Finally and with respect to my interest in sponges, I got to live and work with one of the world's authorities on glass sponges, Dr. Henry Reiswig, for a couple of weeks back in 2009. That experience was extraordinary and it was he who really got me interested in these animals.

There is no one thing. I love diving in submersibles because you are actually down there; I love diving with ROVs because you can see things so clearly with the beautiful HD cameras they have; I love working on sponges up in my lab and analyzing dive video and extracting observations and data on deepwater animals; and finally I love using ArcGIS software to create maps of the seafloor and analyze where animals are living. I furthermore love mentoring students in this software, watching their eyes light up when they create their first beautiful 3D map of a seamount, which they would never have thought they could do.

My 2 years in the Peace Corps in West Africa building and stocking fish ponds got me very interested fishes, which were the topic of my graduate degrees. Later I went on to work for 10 years at an aquaculture institute here in Hawaii, where we developed hatchery technology for commercially valuable fish species. As part of that job, I was sent to a variety of countries around the world including Indonesia, the Philipines, Taiwan, and Egypt, to work on hatchery projects and help develop their aquaculture industries. Following my Ph.D., I was hired by the University of Hawaii where I spent 10 years leading a project on the deepwater bottomfish fishery here in Hawaii. That project involved submersible dives, multibeam sonar mapping, fishing surveys, and rearing deep water fish in a hatchery (yes, it is possible to do that). This project furthermore served as the transition from my aquaculture background to deep-sea ecology.

I played competitive tennis from the age of 12 to 59. I also love snorkeling and scuba diving, table tennis, hiking, and biking. I love rock music and played guitar (but was horrible at it) and I like to watch a lot of tv, particularly action, adventure, and science fiction series and movies

If deep water ecology interests you as much as it does me, you may need to consider getting a graduate degree after you finish college. Whether you do that or not, you should try to get onto a project and get out to sea to find out how it is done. There are internships available from OET, OER, and other institutions and there are often volunteer opportunities you should apply for as well. The great thing about my field is how multi-discipline it is. So if you too like geology, like geography, and like biology, pick one or all of these and start learning about it. GIS is a quiet but incredible revolution that is occurring right now. I advise everyone to learn something about GIS regardless of whether rocks or fishes are what really catch your imagination because there is so much you can do with GIS no matter what your research is. Finally, my general words of wisdom: just because you start out on one path doesn't mean you can't jump onto a different path down the road. You don't have to figure it all out right away and if you aren't completely happy with where you are now, then goodness sake, realize you are not stuck. There are always ways to change your life course no matter how old you are; believe me, because I know.

I have been the program biologist for HURL from 2000 to the present, which is focused entirely on deep water research. I was also asked to serve as the science advisor for the NOAA Office of Ocean Exploration and Research (OER) 3-year CAPSTONE campaign in the Pacific. From 2015-17, we used the NOAA ship Okeanos Explorer to map and conduct ROV dives throughout the Central and Western Pacific. Because of this experience, I met with Allison Fundis and Nicole Raineault at Ocean Sciences earlier this year about OET's plans to bring the Nautilus out to Hawaii and conduct mapping and ROV dives in the monument. During the meeting, I suggested a project to dive on unexplored seamounts in the newly expanded area of the monument where no one had ever gone before. They apparently liked the idea because several weeks later, I was asked to lead the cruise to do that, which I immediately accepted.