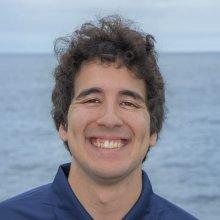 I measure radiation in the environment around us. Specifically, quantifying the amount of certain isotopes like Cesium-137 and Polonium-210 in fish and other foods. Radioactive elements can emit either alpha, beta, or gamma radiation, which each presents their own challenge for detection. I have to develop methods to detect and quantify the concentrations of each of these radio-isotopes as well as quantify the dose that people would receive from them. I am also characterizing a Cadmium-Zinc-Telluride (CZT) detector in terms of detector sensitivity to evaluate its capabilities for future measurements.

My father worked as a Physicist at Los Alamos National Lab, so he would always ask me scientific questions that always made me think when I was young. When I came to Berkeley, I was initially interested in studying physics. However, when I took my first Nuclear Engineering class, Introductory Nuclear Physics, I instantly became fascinated with nuclear physics. I loved learning about the different kinds of radiation and their interactions as well as nuclear structure. Seeing their potential as an energy source and their capabilities in nuclear medicine convinced me that this was the path I wanted to pursue.

My community college physics professor, Vesa Junkkarinen, served as a great inspiration in the field of physics. He was able to entertain any physics question I had and make even the most complicated physics problems seem easy.

The most fascinating part of my research is the implications of the results. Learning about radiation in our environment and food is very fascinating. It appears to suggest that our bodies have developed certain ways of dealing with this radiation.

My research project in quantifying Polonium-210 in fish samples led me to become interested in becoming a researcher. I continued with other projects, like using Geant4, a physics simulation code, to model detector experiments to estimate detector sensitivity. I was always interested in applying what I learned in my Nuclear Engineering classes and my research in professor Kai Vetter's Radwatch program enabled me to do so.

Bachelor of Science in Chemical/Nuclear Engineering

I love playing video games and recently got into Pokemon GO, where I've been doing daily walks to catch them all.

If you're interested in doing research in any field, don't be afraid to ask your professor. The only reason that you can't do research is because you don't apply. Also, don't be afraid to take graduate courses either. I took two graduate courses in Nuclear Engineering and loved the experience since they're much different than undergraduate. You'll also learn many more fascinating things in graduate courses and professors are always happy to have undergraduates in their courses. In general, I believe Shia Labeouf said it best, just do it.