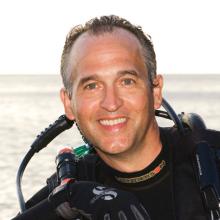 Brian Skerry is a National Geographic Explorer, photojournalist, and film producer specializing in marine wildlife and underwater environments. Since 1998, he has been a contributing photographer for National Geographic magazine, and in 2017, he was named the Rolex National Geographic Explorer of the Year. His work highlighting environmental and ocean issues has raised public awareness and helped elected leaders make policy decisions around protections for endangered species and marine ecosystems. Brian’s work has been featured in publications such as Sports Illustrated, The New York Times, Esquire, and Audubon. Brian is the author of 12 books, including the acclaimed monographs Ocean Soul and Emmy® award-winning Secrets of the Whales.