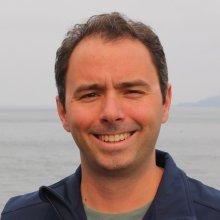 When Brian was five years old, he decided that he wanted to be a marine biologist and explore the unknown reaches of the planet, and now he has his dream job. Originally from land-locked Athens, Georgia, Brian grew up fascinated with marine mammals and the ocean. Brian attended the Honors College at the College of Charleston (CofC) in South Carolina where he majored in Marine Biology and minored in Marine Geology. While at CofC, he had the opportunity to sail on multiple research cruises aboard two different NOAA research vessels and meet multiple NOAA Commissioned Officer Corps members. Shortly after graduating with honors from CofC, Brian was awarded a commission in the NOAA Corps. His first sea assignment was as a Junior Officer aboard NOAA's Okeanos Explorer, America's Ship for Ocean Exploration. Upon completion, Brian was then assigned to NOAA's Ocean Exploration Program, where he worked as an Expedition Coordinator for the Okeanos Explorer. Now separated from the NOAA Corps, Brian works for the Office of Ocean Exploration and Research as the telepresence coordinator. Brian has participated in or led more than 25 expeditions of exploration taking him to two oceans (Atlantic and Pacific), three continents (North America, South America and Asia), and through the waters of more than five countries (Ecuador, Panama, Costa Rica, Honduras, Indonesia).