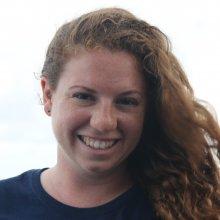 I’m currently a Ph.D. student at the Contextual Robotics Institute at UC San Diego, where I build robots to explore extreme environments, in particular, ocean environments. My research focuses on the technical side of robotics, such as developing algorithms for autonomous mapping, but everything I do has varied applications in science and exploration. My main work right now is on developing a swarm of underwater robots which will create 3D maps of coral reefs. These maps will help ecologists better understand complex coral reef ecosystem dynamics. I’m also working on building an underwater robotic assistant to help SCUBA divers do science underwater. Divers direct the robot using hand gestures to perform tasks, such as taking environmental samples for later analysis. I’m hoping this robot will be useful to people in many scientific domains, from retrieving archaeological artifacts from an underwater cave to taking samples of life on a coral reef. I’m also broadly interested in bio-inspired soft robots, especially those that mimic the locomotion of marine animals. One day I want to build a manta ray robot, because it would be awesome, and also because it might enable us to travel places in the ocean we’ve never seen before. Basically, if there’s a robot that can help humans explore and make scientific discoveries, I want to build it!

In high school, I joined a robotics team that participated in the FIRST Robotics Competition. I didn’t have a clue what I was getting into at the time, but this turned into four years of building robots to play 3 on 3 robots “basketball”, race around a track as fast as possible, and play chase on a slick surface intended to simulate the low-gravity effects of the moon while trying to score baskets into a moving target. After graduating I knew I wanted to keep building robots, so I started a robotics team at my community college where we built a vehicle to navigate an obstacle course over rough terrain. It wasn’t until I got to UCSD and joined a program called Engineers for Exploration that I realized I could combine my love of robots with my love of exploration by building robots to explore the world! I worked for a few years with organizations like NOAA and the San Diego Zoo, building remote monitoring systems for endangered marine animals and 3D imaging systems for mapping shipwrecks, which only increased my excitement for robotic exploration.

I’ve always been inspired by inventors because they use technology and creativity to solve problems. In particular, I admire the work of Dean Kamen, whose hundreds of inventions have changed the world for the better. Also, I had two amazing physics teachers in high school and community college who always encouraged me to keep pursuing science.

There is a constant focus on the unknown in all my work, which is incredibly exciting. Whether it’s trying to figure out how to program a robot to navigate in a harsh, complex environment, or wondering what unseen creatures lie in the deepest parts of the ocean, there is always the possibility for new discovery.

Most of my jobs have been in research and engineering, except for a few years in community college when I worked as an orchestra librarian. I worked at JPL for a year as an intern on planetarium software, and later at UC Berkeley using holographic imaging to model flow fields around filter feeding organisms. My most relevant job to what I’m doing now was as at UCSD Engineers for Exploration, where I was a field engineer and built technologies to support conservation and field research.

My favorite thing is going on an outdoor adventure with a camera in hand. I love being surrounded by nature, whether I’m underwater or climbing up a mountain. I particularly love freediving, backpacking, climbing, and “bikepacking.” On the rare occasions when I’m not wandering around outside (or building robots) I enjoy playing the cello, cooking large Italian meals, and working on classic cars.

Don’t limit yourself! I’ve always been drawn to many different things and was never able to pick one thing to focus on without feeling like something was missing. However, I think that allowing myself to pursue a variety of interests ended up being a good thing since many fields are becoming so interdisciplinary. So no matter what field you're pursuing, I think it's a good idea not to limit yourself to that one field but instead let your curiosity guide you towards other pursuits, since it will create a diversity of perspective which will lead to more creative insights in whatever you do.

I started as an ROV Engineering Intern on an expedition of the Lō’ihi Seamount. I’m excited to be on E/V Nautilus!