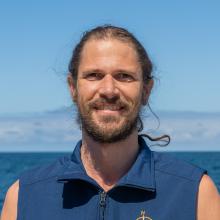 I measure the geophysical and geochemical properties of the Earth, and attempt to give meaning to those measurements so that we may collectively develop a better understanding (i.e. a better "story") of how the Earth works. As an example, when studying fluid and gas discharge from the ocean floor, the ratio between the helium isotopes 3He and 4He can be informing on the history of the discharge fluid, and specifically, its interaction with Earth's mantle. I spend a lot of time in the laboratory processing samples that were painstakingly collected from the ocean column and its floor. The end result is often a humble list of numbers that are suffixed with units of measurement, but it is critical to understand that these numbers are meant to represent the true state of the Earth at some time and location, and are informing on the Earth's story in much the same way that pages are informing on the story within your favorite book.

I cannot clearly identify the earliest single event that influenced me towards a scientific career, but when I was very young I had many questions about the world and the answers that grown-ups rendered did not feel satisfying enough. I wondered what the moon was and why it was there. I wondered what was beneath the Earth where I stood. I wondered how I awoke into life and what this world around me was. I feel that as I entered life, I entered into a strange and puzzling world. TV shows like "Cosmos", and stories about some of my adventurous relatives were helpful in teaching me that, "Hey, it's OK to be puzzled and to want to know and do more".

I think my mother influenced and encouraged me the most, at least early on. I think she saw what she though was brightness in me and sought to make something of it by doing things like having scientific conversations with me, asking "Why do you think that is?" again and again. I think those early conversations were effectively exercises that would help develop my critical thinking and communication skills.

It fascinates me the most knowing that each time we go on a cruise, we explore some part of the Earth in a new way that has never been explored before.

Jobs I've had include house painter, Earth Science teacher at Richmond High School (have you seen the movie "Coach Carter"?), minerals exploration geologist, geotechnical engineer, roof thatcher, monkey sanctuary care-taker, electron-valve amplification and electronics designer, thermal petrophysicist, crustal heat-flow scientist, scientific apparatus R & D, ocean profiling system engineer, and more! But these jobs are really just snapshots in time, and don't represent the process that has led me to be where I am today. This process is to have a continuing desire to find one's purpose in life. It may be that that purpose turns out to be just a stepping-stone to one's next purpose, but it is nevertheless essential in order to seek a life that is genuinely rewarding and meaningful.

I have solid "hobbyist" status as a musician and composer, as a music recording engineer, as a writer, as a designer and builder of guitar amplifiers, and more! Skateboarding at skate-parks is a new hobby that I've undertaken. I try to guide my surrounding community in a direction of what I think is good physical and mental health.

Stay hungry. Basking in the memory of your old glories and making those glories be the definition of your self-identity is a sure way to become psychologically immobile, i.e., stuck. New neural connections must be built through stimulation, or they will just fade away. You must stay hungry for more improvement in order to maintain an interesting and active life, including your career. Learn everything you can from the people you work with, and out-do your old self. Remember: if the growth process feels scary or difficult, it could be because you're in unexplored territory, which is where you wanted to be anyway.

I work with the Primary Investigator (PI) for the Pacific Marine Environmental Laboratory (PMEL) helium isotope laboratory, Tamara Baumberger, who is also the PI for this cruise. I applied for the position when it became publicly available, and I believe my background made me well suited for it.

Sending an ROV to the bottom of Earth's ocean is literally as exciting as sending a robot to any of the Solar System's other planets.