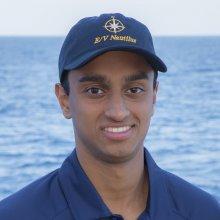 Tell us about your academic interests. What subjects / topics are you most interested in?

Going to Thomas Jefferson High School for Science and Technology has exposed me to many scientific disciplines, some of which I have taken great interest in. I want to understand the underpinning of systems, and using the ocean as an exemplar, I have gravitated towards biology and chemistry courses that have helped me gain a deeper understanding for core scientific principles. The reason marine science is appealing to me is because less than five percent of the ocean has been uncovered, and the field has a promise to sustain us as race; oceans are a buffer that help maintain equilibrium for the Earth. Outside of science, I am interested in Law and History and look forward to furthering my knowledge in those fields to complement my scientific interests. Foundational Liberal Arts courses help us give a context to implement science.

What sparked your initial interest in STEM?

No one tells us to climb a tree or lift rocks to chase worms; it is the innate curiosity of the human mind. My education helped me kindle the flame of understanding the basic principles that govern natural phenomena. Science projects during elementary and middle school and being at a premier science and technology high school in the county have helped in taking a deep dive into the sciences.

Who has influenced you or encouraged you the most so far?

We learn from our surroundings and people around us. Rather than worshipping heroes, I have tried to emulate the traits of successful people in science, politics and sports. My parents have also provided unwavering support for me up to this point in my academic career and personal ventures and have served as role models whose actions speak louder than their words. They have instilled the core principles of hard work and honesty in me and have encouraged me to take risks and have lofty aspirations as long as there is a rationale to my plan of action.

What prompted you to apply to the HRP program? What are you most intested in seeing / doing while on board the ship?

My experience as a JASON Argonaut in the summer of 2013 prompted me to apply to the Honors Research Program. As an Argonaut, my time on the Nautilus was spent during a transit leg, and unfortunately was not able to experience a dive. As an Honors Research Student, I look forward to participating as a member of the watch during a dive and seeing Argus and Hercules in action.

Have you received any special awards or certifications?

In June 2014, I received the Scott Rawson Sloan Award is annually given to a Vienna Babe Ruth baseball player who demonstrates the following qualities on and off the field: love for the game; respect for other players, coaches, and umpires; leadership by example; and generous teaching and sharing skills with other players. During the 2015 high school season, I received an All-Conference Honorable Mention for my performance at shortstop. This high school season, I received Second Team All-Conference honors as a utility player. In May 2016, I received second place in the annual Virginia State Bar Law in Society Competition for a response to a hypothetical that prompted questions about an institution’s ability to maintain academic integrity at the expense of student privacy. Previously, I was also a state finalist in the National Geography Bee and represented my school in Math Counts and Model United Nations.

What are your hobbies? What do you do for fun?

I love the game of baseball and I try to stay involved in the game whether I am playing, watching the New York Yankees march toward title number 28, or volunteering in my local Challenger League. I also like to spend time with my friends and family and taking some time for myself to relax and prepare for my next endeavor.

What advice would you give to younger students who are interested in pursuing STEM opportunities?

I would tell younger students who are interested in STEM to take advantage of all the opportunities they have and to remember that without a holistic educational experience they are closing more doors than they are opening. Maintaining a balance between STEM and the humanities is important in excelling in STEM because no matter how advanced of a scientist or mathematician an individual is, his/her sphere of influence is often limited by his/her communication skills. Communication is a two way street where a scientist is able to share their results with the general public, but also internalize their findings and determine whether they completed the mission they embarked upon.

What is a favorite quote or a quote that inspires you?

"There may be people who have more talent than you, but there's no excuse for anyone to work harder than you do," Derek Jeter.

What would your dream job be?

My dream job would be something that incorporated my aptitude for science with my interest in Law and other Humanities fields. I do not want to be confined to a cubicle, but want to be an active member in the community, whether it is educational outreach or general advocacy for a cause. In other words, I do not have a final destination for a dream job, but to embark on a journey that is intellectually challenging and brings the most out of me, and one that makes a positive difference in the lives of those around me.