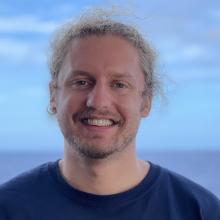 I am working in the geophysics field and my research is focused on plate tectonics. More specifically I work on analyzing data from Pacific seamount chains to help better understand the absolute motion of the Pacific plate and the deep-mantle plumes that create these seamount chains. The data I work with includes seamount bathymetry, radiometric age, and paleolatitude. All this data has been previously collected but there is always room for improvement by collecting more. For now I work with the data we have available, spending most of my days on the computer writing code. I hope my work helps shed light on our understanding of absolute plate motions and the drifts of deep-mantle plumes.

Growing up on the east coast of the United States, I took my first trip to the west coast my freshman year of college. In Seattle, between the Olympic and Cascade mountain ranges and amazing views of Mt. Rainier, I was blown away by the beauty but also immensely curious about how this terrain formed. While studying physics in undergrad I decided to take a geology course as an elective and I fell in love with it. From there I decided to pursue a career in Earth science and coupled with my skills in physics I ended up going to graduate school studying geophysics.

One of my professors in undergrad encouraged me the most. When I was having doubts about my ability to make it to graduate school, he reassured me that he had no doubts I could get in and make it through grad school. This reassurance was just what I needed to work a little harder and eventually get accepted to grad school.

The most fascinating thing I have done is help develop a new method for solving hotspot drifts. The Hawaiian Islands show a slight southward bend in the Hawaiian seamount chain, leaving the big question as to whether this is caused by a recent change in Pacific plate motion or recent movement of the Hawaiian hotspot. Playing a pivotal role in research that may help shed light on this I find quite amazing.

My work as a research assistant during my graduate studies has led me to where I am now. While I have gained much knowledge in the field of plate tectonics, I have also gained many transferable skills including data processing and analysis, coding, computational modeling, and generally thinking with a scientific mind, and being able to solve problems with open-ended answers.

Bachelor of Science in Physics - Lycoming College; Masters of Science in Earth and Planetary Sciences - The University of Hawaii at Manoa

I love being in the mountains and being in the water. In Hawaii, I spend my free weekends hiking, bodysurfing, or just lounging on the beach. I also enjoy weight lifting, cooking, and going for walks while listening to podcasts.

Ever since I started working on plate tectonics research I wanted to go to sea in order to experience for myself how much of the data I work with is collected. I received a forwarded email about the Ocean Exploration Trust's internships and that they were taking applications. The seafloor mapping internship seemed right up my alley and something I would be very interested in doing.

If you want to pursue a career in the Earth sciences or any science field in general, gain hands-on experience and learn how to code as soon as possible. I was not on top of these skills moving forward in my career, so if you are already behind it is not impossible but it will make your life easier and career move forward faster if you are on top of it. That being said, I would also say it is never too late to learn new skills if you want to pursue a career in science.