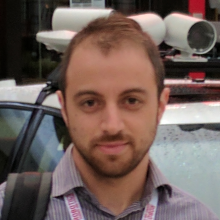 I am a roboticist, software engineer, and Ph.D. candidate at the Toyota Technological Institute at Chicago (TTIC). My research focuses mainly on human-robot interaction and cooperation through both natural language (e.g., English) and data visualization. The objective of my research is that of providing people with little-to-no robotics background the tools needed to effectively interact and cooperate with robots in unstructured environments. I firmly believe that natural languages and simple but effective data visualizations can allow a bi-directional exchange of information and intents about the environment, a task at hand, or a particular situation between a person and a robot.

I started out in computer programming in early high school and slowly moved towards computer engineering and ultimately into robotics. I have always been interested in developing tools aimed at providing insights into how complex systems work, whether it was a simple telemetry and camera dashboard for a miniature self-driving car or a full 3D viewer for the NUI manipulator.

My uncle was the person who influenced me the most when I was young. He is a geologist and introduced me to computers in the late 90s. He was also the one who, about 10 years later, took me to a science museum in Milan, where I saw a group or students from a robotics class from a local university give a demo about simple wheeled robots. That is what sparked my interest in robotics.

The thing I like the most is being a software engineer. In particular, I love designing complex distributed software systems, I think I'm good at it. Recently I had the opportunity to design the software architecture that powers of an entire robotic platform (known as Duckietown) from the ground up. The same software architecture had to power fleets of self-driving vehicles, drones and smart city devices. It took me years to get enough experience and insights into this problem, but my architecture now powers thousands of robots around the world. It is just surreal.

My Ph.D. adviser, Matthew Walter has worked with the Woods Hole Oceanographic Institution and Ocean Exploration Trust for a long time. I'm happy to be able to contribute to this project.

Bachelor of Science in Computer Engineering - University of Calabria, Italy

My work is my hobby, I can't help it.

Don't be afraid to spend (way too much) time on a problem that you care about. I see a lot of students rushing throw as much material as possible trying to cover as much as possible in the shortest amount of time available. I believe depth is more important than breadth when it comes to building a career. The more time you put in into something, the more you get out of it. The question is, what is that thing you should be focusing on? Good luck with that. :)