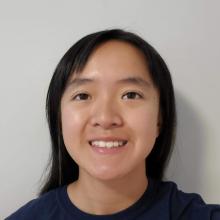 I’m interested in finding ways to increase the autonomous capabilities of deep-sea robotic manipulators to improve their exploration capabilities. Robotic manipulators are useful for collecting samples or taking measurements with delicate instrumentation that require a high degree of dexterity in remote regions that are inaccessible by people. Currently, vehicles equipped with manipulator arms generally have a much more limited range than fully autonomous vehicles because of their reliance on joint-by-joint control input from pilots, which requires them to stay within close proximity to their ship. Increasing the autonomous capabilities of these arms would enable us to sample in more remote regions than we’re currently able to today.

As a step towards this goal, my current work is focused on shared autonomy - instead of having pilots control the arm joint-by-joint, I’m working on a system that will enable the arm to be controlled via task-level commands like “pick up the sampling tool.” An added benefit of this partial automation is that the bandwidth required to work with the arm is now greatly reduced. To fully leverage this, I’ve been working on an interface that enables remote scientists to see real-time data from the arm and vehicle and provide input on sampling locations, regardless of their proximity to the ship.

Ever since I was young, I’ve always had an interest in robotics and found my start on a high school robotics team. I really enjoyed my experience there, which led me to study robotics during my undergrad at Olin College of Engineering. At Olin, several of my classes emphasized the importance of finding ways to leverage our engineering education to “do good in the world,” but I wasn’t sure what type of impact I wanted to have with my work. I first became interested in the marine sciences during my time abroad with SEA Semester, and ever since then, I’ve been interested in working at the intersection between robotics and marine science.

My parents have always been super supportive and encouraged me to find something I enjoyed doing as a career, and it was thanks to my professors at Olin who helped me find a way to leverage my passion in robotics to make a positive impact.

I think it’s incredible how enabling technology is in equipping us with tools for exploration, and how quickly it’s evolved over time. The idea that I’m able to see data from a robot sitting at the bottom of the ocean thousands of miles away in near real time continues to blow my mind, and I’m excited to see how the tools we use for exploration continue to evolve throughout my career.

Worked on a project with my current research advisor at WHOI, Dr. Rich Camilli.

I did a couple of internships during the summers during my undergrad, which helped me confirm that I wanted to have a career related to robotics. During one of these internships, I spent a lot of time working with industrial robot arms, which sparked my interest in robotic manipulation.

My hobbies tend to vary based on wherever I am at the moment, and I like to try out new activities so they’ve changed considerably over time. Baking, playing tennis, and kayaking are ones that have remained more “constant,” but more recent ones I’ve picked up are sailing and rock climbing.

Don’t be concerned about “feeling behind” when it comes to pursuing something you’re interested in! When I first started undergrad, I had a budding interest in working on the software side of robotics, but I hadn’t written any code before starting at Olin. Seeing my peers who had already developed apps or had software internships in high school made me inclined to study mechanical engineering instead (because that’s what I mostly did on my high school robotics team). I quickly found that I enjoyed the software side of things much more, and although it took some time to learn by the time graduation rolled around I no longer felt like I was behind or missing something. Right now, I sometimes feel like I’m in a similar situation starting grad school with the MIT/WHOI joint program - several of my peers had known they’d wanted to study the ocean since they were little. As someone who only recently started studying the ocean, I sometimes feel like I don’t know enough, but I’m hopeful I’ll learn more in time!