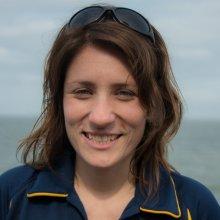 I teach two different science courses that each integrate physical, earth, and life sciences into one narrative and have a strong focus on building proficiency in scientific practices. The grade 7 theme is Energy Systems and the grade 8 theme is Cause and Effect. Simply put, my goal is to teach my students how the world works. There are systems on Earth that operate on enduring principles (high flows to low, hot flows to cold, matter is always conserved, etc.). If my students can understand the mechanisms of the atmosphere, lithosphere, hydrosphere, and biosphere, then they will be incredibly prepared to generate solutions to problems that arise, such as climate change. To accomplish this, I have to make it real and relevant. When we learn about the role of thermal energy and gravity in the water cycle, we build models of the Cape Cod aquifer, run water through them, pollute them, and clean them up. When we study natural hazards, each student is analyzing their town’s natural hazard plan on their town’s Web site. I also want my students to know that they are scientists: that a scientist is just someone who explores the world in an organized way. They can do everything a real scientist can do - from using scientific tools to collecting and analyzing data and finding real world applications. To accomplish this, I put them in the role of scientist as much as possible. They are doing investigations and using the scientific method constantly. They are working in lab groups and creating models and reports. And, I want them to learn that scientists are part of the fabric of our community. Of course, we talk about Isaac Newton - the man created Calculus before he was 26, he deserves the recognition! But we also invite contemporary local scientists into our classroom.

I was given SCUBA lessons for my twelfth birthday, and the classes scared me. There was a two-hundred page textbook, and I had to learn what an atmosphere of pressure was and how to calculate it. To stay alive while underwater, I had to understand how my body would react under pressure, how that pressure caused changes in my blood chemistry, and how to use formulas to calculate plans for dive times, depths, and surface intervals. The freedom of the first dive was exhilarating though. I could stay down for a long time and look around. This was the same year that my science class dissected a clam. I had seen clam shells in the ocean before, but had never looked inside one. It was the first time I made a connection between science class and my fierce love of the ocean. When I taught my first science classes to middle school students, at a residential environmental education school in Maine in 2006, I included as many dissections as I could. As we explored the biology of sea stars, sea urchins, dogfish, lamprey, and turtles, I could feel the energy of the class elevate. The sea urchin has the pattern of a sea star on the inside of its shell - it's a clue that they are related! Turtles have lungs just like us, and this is what they look like when they inflate! When I was in eighth grade, I was invited to join the Mentorship Project, which paired up students with professionals in the community. Because my grandparents in Florida lived near Mote Marine Laboratory, which was founded by well-known shark scientist Dr. Eugenie Clark, I applied for an internship there and spent the month of February 1991 assisting with feeding the baby nurse sharks and collecting skate eggs from shallow tanks. I was told that if you rubbed the nurse shark in the wrong direction, from tail to head, it would bite you! The scientists were studying the skates to learn about the proteins that sharks and their cousins possess that may make them resistant to cancer. I started to think more acutely about the connection between society and the natural world. When I joined the Mote staff in 2008, I guided the youth internship program to make these connections even more visible in the curriculum.

I like to say that my family gave me the beach and only asked in return that I not track it into the house. Before I wanted to protect the ocean, and before I wanted to teach others about the ocean, I simply loved the ocean because I got to be near it, on it, and in it all the time.

I find how the human brain learns fascinating!

My career has had a winding, but purposeful path. I enrolled at the University of Connecticut because it had a strong marine biology program, but I let one terrible experience in a calculus class intimidate me out of my major. I turned to writing and to social science instead. In my senior year, I conducted my first scientific study: a qualitative analysis of censorship of literature in high school classrooms. In preparation, I took graduate level sociology and education, which brought into my world the rigor of creating and executing a valid study and the first opportunity to learn about middle and high school environments from a teacher’s perspective. After graduation, I looked for jobs that would use my writing skills and allow me to maintain a connection to science. I was a production editor at a physician’s journal at the Massachusetts Medical Society, and then a development editor at Addison-Wesley Professional and Addison-Wesley Higher Education (now Pearson Education). At AW, I was assigned to assist in the revision of the sixth edition of a book called Environmental Economics by Tom Tietenberg, which led me to think seriously again about the relationship between people and the environment. How could I return to this long-held passion and become part of the discussion in a more meaningful way? At this point, I had a master’s in publishing from Emerson College and I thought that I should let real world experience inform my decision, rather than hop right back into a graduate program. I thought there were three potential avenues: teaching, resource management, or scientific research. I spent two years volunteering and interning full-time in these areas. Along the way, I worked at the School for Field Studies in Turks and Caicos where I supervised the SCUBA activities of the college students performing research on the coral reef. I saw for the first time the careful planning and measurements that went into a quantitative study. While scrubbing boats, I learned the genus and species of over 200 marine plants, invertebrates, and fish, discovering their taxonomic relationships and their roles with the fragile tropical marine ecosystem; then taught them to the students and performed their field tests. Living in a small community, I could chart daily the relationship between the fisheries, the government, the commerce, and the health of the reef. At each post I held, I gained valuable scientific knowledge and then gravitated towards finding meaningful and effective ways of sharing it with others. My accumulated experiences were appealing to Mote Marine Laboratory and they invited me to join their education staff. A year later, I was asked to join the founder Dr. Eugenie Clark, also known as The Shark Lady, on a research expedition to Indonesia to study the sand diving fish, Trichonotus elegans. I wondered: why is this one tiny fish so important that it would send us around the world for a month to watch it dart around in the sand? I went to find out and came back rich in practical experiences about how we ‘do’ science to share with my students. I moved back to Massachusetts to manage the education department at Mass Audubon’s Wellfleet Bay Wildlife Sanctuary. My role there was to facilitate the conversation in the community – to connect the scientists with the community, or the community with a medium, such as art, literature, or film, that would enhance their engagement and understanding of a scientific topic.

I love to SCUBA dive, travel, read, and spend time with my family and friends. I also really like movies about time travel!

First, be enthusiastic, engaged, and open to new experiences and people. Recognize that you can learn something from each situation and person who crosses your path.
Second, don't be afraid of your own evolution as a person and a professional. A strong sense of purpose doesn't have to translate into one job title and one company for the rest of your life.
Third, learn skills that will make you a useful team member. For example, if you want to work in an aquarium, learn how to balanced the chemistry of an aquarium tank and keep fish alive. If you would like to work on boats, learn how to tie knots and perform emergency rescue skills.
Fourth, be aware that environmental professionals are not fighting to save the Earth. The laws of physics tell us that the Earth will be just fine. But will it continue to be a hospitable place for the life forms that live here now? That may be up to us.

I applied and was accepted to be a Science Communication Fellow on the GISR (Gulf Integrated Spill Response) expedition in April 2015.

"I am excited to be a part of the education team aboard the Nautilus because it's an opportunity to foster understanding, hope, and action in ocean conservation - and because connecting students with concrete applications of STEM skills will create a world of scientists and citizens who are prepared to face the world's challenges."