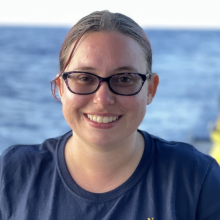 My research centers around igneous rocks and magmatic processes. I am currently working on rocks from the central Pacific basin to understand the age progression of hot spots in the Pacific by using geochronology. I also study the geochemistry (major/minor, trace and isotopic abundances) of the rocks as a "fingerprint" for determining the source of the volcanism that formed the rocks. This involves collecting the rocks and breaking them open using a sledgehammer or saw to reveal their insides. Usually, the outside of the rocks is altered from sitting in seawater for thousands of years, so the interior is closer to the original appearance and composition of the rocks as a whole. I then make thin sections (microscope slides) to look at all of the different minerals and crush the rocks for analysis.

I have always been interested in geology. When I was young, I loved to read about dinosaurs and could parrot the scientific names of several of the species. That love for paleontology then expanded to archaeology and volcanology. To me, many major events in earth's history that are recorded in the paleontological and archaeological records are influenced by volcanic eruptions so understanding those eruptions is key in understanding those events. Once I started learning more about volcanoes, I got the chance to go to Iceland to watch a current eruption. It's been more than a decade since then and I'm still in awe over the wonders of volcanoes.

Everyone in my life has been a great encouragement on my journey through geology from my family to my college professors.

I think the most fascinating part of my work is when I get a curveball. It can be something as simple as finding fresh olivine in a very altered, old submarine rock.

My journey towards my career is still ongoing. I am currently a first-year PhD student. I've had experience working at an archaeological dig site in South Africa; as a teacher; working in geology laboratories and as a maintenance planner. All of these experiences have increased my knowledge base in how to interpret and communicate data.

I am a bit of a cat lady. I love to spend time at home with my cats while reading or crocheting.

My best advice would be to not get discouraged and to talk to people in the field you are interested in. A new career or path can start at any age, with any background. When I first started in geology, I would never have imagined that I would eventually be studying ancient submarine volcanoes in the middle of the Pacific or have the opportunity to join a research expedition. It may not seem so at first glance, but most jobs and experiences can lend knowledge toward opportunities for the future.