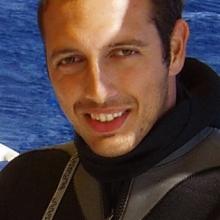 Alexis currently serves as a maritime archaeologist and cultural resource manager for the U.S. Naval History & Heritage Command. In his professional capacity, he is involved with stewardship, research, conservation, and curation of the U.S. Navy’s sunken military craft. Through his academic research, Alexis has directed and participated in a breadth of archaeological investigations in the Mediterranean and Black Seas that vary in scope, methodology, geographical location and chronological range. His practical experience includes underwater visual surveys, site documentations, remote-sensing surveys, as well as terrestrial, shallow-water, and deep-water excavations. He has an active interest in nonprofit management and museum studies and has also been involved with the conservation and digital reconstruction of sites and artifacts, having spent time at the Clemson Conservation Center. Alexis has taught classes at Texas A&M University, the George Washington University, and the U.S. Naval Academy, while he also recently served as co-editor of the Oxford Handbook of Maritime Archaeology (2011).

Alexis will complete his doctoral studies at Texas A&M University's Nautical Archaeology Program in August of 2012, having received a Master's degree from the same program in 2008. In addition, he has been awarded an executive certificate in Nonprofit Management from Georgetown University, as well as graduate certificates in historic preservation and artifact conservation from Texas A&M University. His undergraduate degree is a Joint Honours B.A. in Ancient History and Archaeology & Modern Greek Studies from the University of Birmingham (U.K).