The first 2019 expedition aboard E/V Nautilus, the Osborn Bank expedition is a continuation of a multi-year collaborative expedition to collect high-resolution mapping data and characterize submerged shorelines in the California Borderland region. The focus of this year’s exploration continues in the Channel Islands off Southern California where Nautilus has been working for the last four years. This expedition will run from May 9-13, 2019 and is sponsored by NOAA Office of Exploration and Research, Office of Naval Research, and CITGO.

Previous Nautilus expeditions in the area focused on locating and documenting a series of ancient or paleoshorelines that were formed when the sea stopped rising for periods lasting a few thousands of years, allowing the sea to cut caves into the newly exposed sea cliffs, much as it does today. One of these caves will serve as an underwater experimental laboratory to test 3D imaging system that will eventually be used to explore caves that are far deeper than divers can go, in a collaborative effort to gain information on coastlines of the ancient past.

The primary focus of this cruise is to map caves on Osborn Bank, a follow-on to the effort by Nautilus over the last several years to acquire high-resolution mapping data of submerged shorelines and characterize these features primarily with remotely operated vehicles (ROVs). Osborn Bank, located offshore of the Channel Islands, is the focus of this expedition as it does not receive sediment input from land, which obscures shoreline features such as caves from view.

This well-known stretch of the California coastline did not always look the way it does now. Within the California Borderland, the Channel Islands region has a complex geologic history, starting with a fiery formation by submarine volcanism 19-15 million years ago and subsequent millions of years of movement. While the foundations were shifting, changing uplift rates and glacial cycles also resulted in fluctuating sea levels eroding away the islands, leaving strands of sedimentary rocks both above and below the current sea level as evidence of ancient paleoshorelines.

The priorities for this expedition are:

The Nautilus Ambassador Program will also run during this expedition, bringing educators selected for their leadership in STEM (science, technology, engineering, and mathematics) education from OET Community STEM Program sites aboard Nautilus to participate in authentic exploration. Ambassadors gain exposure to the fields of and career pathways within ocean science, technology, engineering, and communications while onboard. Ambassadors support the mission of Ocean Exploration Trust by becoming role models for ocean exploration to students and other educators within their home communities. The four Ambassadors this year represent Houston and Corpus Christi, Texas, Lake Charles, Louisiana, and Lemont, Illinois, communities where OET has been active in schools and local organizations promoting the excitement of discovery and potential found in STEM careers for the last five years. 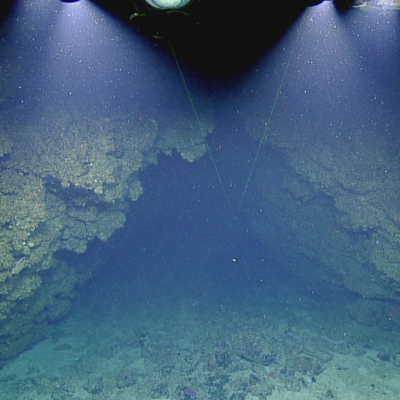 Launching the 2019 Nautilus Expedition season, the Osborn Bank expedition is a continuation of a multi-year collaborative expedition to collect high-resolution mapping data and characterize submerged shorelines in the California Borderland region. The focus of this year’s exploration continues in the Channel Islands off Southern California where Nautilus has been working for the last four years.