All organisms shed cells. Just as you constantly slough skin cells, creatures in the ocean also leave traces behind, from enormous blue whales to deep sea corals to tiny microbes living at hydrothermal vents. These cells contain DNA, the molecule responsible for carrying genetic information for all living things.

Remains of an organism’s genetic material can tell scientists about the overall health of the ecosystem and the inhabitants. Environmental DNA or eDNA is an emerging area of study that may help researchers to better know the ocean and its inhabitants. eDNA is a DNA sample collected via an environmental medium such as soil or water; by examining the genetic traces left behind in that medium, scientists can study creatures without direct contact. This has been extremely useful for studying species that are particularly difficult to collect samples from such as Orcas and deep sea corals.

In the ocean, eDNA collection relies on water sampling in close proximity to specimens of interest. The sloughed cells from a species like a deep sea coral are pulled in with water samples, and those cells contain small amounts of DNA from the corals nearby. By amplifying sets of specific DNA sequences, coral biologists can use the small amount of eDNA captured in the water sample to identify the coral by its genetic fingerprint. This non-invasive technique could replace physical sampling for any species for which this technique is validated. 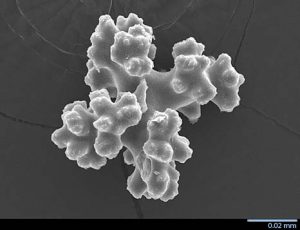 Deep sea coral biologists have long been limited by the fact that physical specimens must be collected to make a species-level identification and taking coral samples, even prudently, is somewhat invasive. To make a species-level identification, the ultrastructure of the coral skeleton, specifically the sclerites, must be visualized by a scanning electron microscope. To minimize sampling, coral biologists have been searching for a new way to accurately identify corals to the species level. 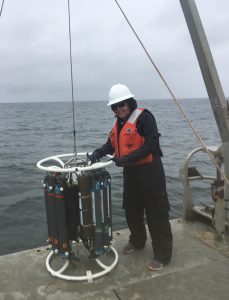 C​​arol Stepien on board the Reseach Vessel Tatoosh deploying a device for sampling water for eDNA in the Olympic Coast National Marine Sanctuary. Credit: NOAA/Kim Andrews

Today, eDNA sampling is changing the way corals and other sea life are identified, and this technology may prove invaluable in future research. With only five percent of the world’s ocean explored, to some it is a race against time to learn as much as we can before some biodiversity is lost forever.

Carol Stepien is the Ocean Environment Research Division leader at NOAA’s Pacific Marine Environmental Laboratory in Seattle. Her Genetics and Genome Group is working to develop technologies that will help researchers in the future to assess oceanic communities and how, or if, they are being impacted by changes in the ocean using eDNA.

“We know almost nothing about creatures in the ocean,” said Stepien, adding that whole groups of species are being discovered, sometimes daily. “What we know is a drop in the bucket about who is in the ocean, especially when you get into the deep sea.”

Stepien’s lab is collecting eDNA samples from Axial Seamount, an active underwater volcano in the NE Pacific Ocean, and from methane seeps along the Oregon and Washington Coast. They are focused on invertebrate communities such as clams and chemosynthetic organisms; her team is collaborating with other researchers who are looking at microbes. Ultimately Stepien hopes to develop genetic markers for DNA sequences that would aid identification through a massive collaboration between government, academia, and scientific institutions.

“We’re in the beginning of a scientific revolution of how to do this,” said Stepien. “It’s going to take a lot of different researchers working together — communicating, publishing, and developing these applications. We’re looking at developing highly diagnostic, fast and inexpensive tools for the future.”

Stepien thinks within ten years we will see something similar to Monterey Bay Aquarium Research Institute’s environmental sample processor (ESP), but with the capacity for eDNA monitoring, using drones and satellite transmission. The ESP instrument is basically a high-tech lab in a can that can be loaded onto an autonomous vehicle and deployed to collect and process samples without returning to land.

We need better records of creatures and organisms in the ocean and eDNA is an exciting tool because you don’t need to disturb the habitats or the sea life, according to Stepien. She sees a future where technology and scientific ingenuity are going to allow us to understand what is happening in the ocean in real time — problems like ocean acidification and hypoxia could be studied in situ without disturbing the ecosystem.

Her enthusiasm for the subject is contagious when she starts to talk about what is possible today and what we’ll be able to to in the future. You’re able to start to focus and solve problems I never even dreamed of when I was in grad school,” Stepien said. “It is very fun and exciting as a scientist — I’m having such a good time working on this.”

Jenny Woodman, Proteus founder and executive director, is a science writer and educator living in the Pacific Northwest; she was a 2018 lead science communication fellow for the Exploration Vessel Nautilus. Follow her on Twitter @JennyWoodman.

Dr. Amber Hale is an assistant professor of biology at McNeese State University in Lake Charles, Louisiana. She uses molecular biology techniques in non-traditional model organisms. She is passionate about STEM education and science communication in her community and was a 2018 lead science communication fellow for the Exploration Vessel Nautilus.

The Power of ‘Environmental DNA’ For Monitoring Whales by GrrlScientist

Deep sea corals are colonial organisms made up of many individual organisms called polyps, working in concert to survive. Each individual has a job to perform in order for the entire colony to grow and thrive. While most people are familiar with colorful warm water corals found in shallow, tropical waters, these only represent about 15 percent of the world’s corals, according to the California Academy of Sciences’ Curator of Invertebrate Zoology and Geology, Gary Williams.

The other 85 percent of corals are deep sea or cold water corals, which are hard to study because it isn’t easy to get to the deep ocean with any frequency. Cold water corals differ from their shallow water counterparts in many ways, but one major distinction is that they do not rely on a symbiotic relationship with the photosynthetic algae, zooxanthellae (pronounced zoo-uh-zan-thella), that live inside warm water corals.

In the upper layers of the water column where the sun’s rays penetrate, most organisms like zooxanthellae rely on photosynthesis for food production. The algae barters food for rent in the relationship with their coral homes.

The sun’s light cannot reach the deep waters where cold water corals live, so these corals must eat nutrients found in debris that falls from the shallower layers of the ocean – this mixed debris is often called marine snow. Due to the limited amount of marine snow reaching the seafloor and the harsh environment of the deep sea, these corals are slow growing, but can be extremely long-lived. Bamboo corals have been aged to be more than 450 years old!

Environmental or eDNA is a DNA sample collected via an environmental medium such as soil or water; by examining the genetic traces left behind in that medium, scientists can study creatures without direct contact. During the 2016 and 2017 E/V Nautilus expedition seasons, water samples were taken in close proximity to deep sea coral species of interest in Cordell Bank and Greater Farallones National Marine Sanctuaries. Corresponding physical samples were taken as well. With both the eDNA sample and the physical specimen, coral biologists worked to validate coral-specific eDNA protocols.

Biologists first amplify and sequence a set of DNA regions of interest from the eDNA sample, then these sequences are compared to corresponding sequences from the physical specimen. This creates a species-specific “DNA fingerprint.” Repeating this process for many species allows scientists to build a library of coral DNA fingerprints, enabling future biologists to confidently use eDNA samples to identify corals without the need for physical sampling.

The Nautilus Exploration Program is funded by these major partners.