Continuing to explore the Gulf of California, this expedition aims to explore the geological, biological and geochemical features of the recently discovered Pescadero Basin hydrothermal vents. From October 30-November 6, 2017, E/V Nautilus will launch the second expedition exploring little-known regions of this region’s seafloor with Woods Hole Oceanographic Institution. Pescadero Basin is the deepest basin (3800m) along the East Pacific Rise at the southern end of the Gulf of California, hosting an array of deep-sea biological communities thriving among carbonate chimney structures, which are starkly different from more common sulfide-dominated mid-ocean ridge vents.

Support for the Pescadero Basin Expedition provided by the Dalio Explore Fund.

In early 2015, high temperature hydrothermal venting was discovered in Pescadero Basin (PB) in the southern Gulf of California, revealing a vast array of deep-sea biological communities thriving among carbonate chimney structures--features that have previously only been observed at the enigmatic Lost City Hydrothermal Field along the Mid-Atlantic ridge. As a result of their striking contrast to other deep-sea hydrothermal systems where chimney structures are dominated by sulfides of iron, copper, and zinc, the high temperature, high carbon Pescadero Basin vents offer a unique opportunity to examine a range of questions about the geologic evolution of this system, the composition of the biological communities living in these ecosystems and the role of fluid venting on ocean chemistry and climate. Fundamentally, this cruise aims to collect as much data as possible for informing our understanding of relationships between fluid chemistry, organism distribution and the evolution of this unique geologic setting.

The primary objective of this cruise is to comprehensively characterize the geological, biological and geochemical landscape of three previously identified sites of hydrothermal venting. Specific cruise objectives include collecting and measuring the composition of vent fluids, characterizing communities of organisms living near vents, collecting a representative sampling of rocks and sediment push cores, and visually surveying target sites.

The guiding scientific questions for the exploration of Pescadero Basin include:

The chemical composition of fluids and rocks from hydrothermal vent systems can reveal a wealth of information on the key geological, chemical and biological processes that shape these unique ecosystems. A key challenge in the study of seafloor hydrothermal systems is the ability to study situational and time-based variations in fluid chemistry. The common methodology of collecting individual samples in situ and transporting them to the surface for analysis does not capture this variability, so in situ chemical analyzers have been developed. At Pescadero Basin we plan to couple a laser spectrometer measuring methane carbon stable isotopes with a subsea mass spectrometer to make in situ concentration measurements of a suite of chemical parameters. This combination of in situ chemical concentration and isotope measurements will be a scientific first for deep-sea exploration, and will be essential for quantifying the origin and flux of carbon and other chemical species from the vent system.

Carbonate deposits in the deep ocean are known to occur through two methods: 1) slow-spreading mid-ocean ridge environments in which exposed rocks are altered (like the Lost City site), or 2) through accumulation of biological matter in sediment. The Pescadero Basin sites are considered enigmatic by researchers, and this expedition will evaluate the origin of carbon in vent structures and underlying mechanisms driving this hydrothermal system by collecting rock samples from vents emitting fluids at a variety of temperatures and compositions. In addition, we will conduct high resolution mapping using the Hercules ROV to evaluate the extent and amount of carbonate precipitation that has taken place. With these data and estimates of flux derived from in situ fluid measurements, WHOI researchers will study the amount of carbon released to the ocean vs. sequestered into carbonate chimney structures.

Hydrothermal vents in the deep ocean are ephemeral over timescales of hundreds to thousands of years. As venting at one site wanes and emerges at another location, a process of colonization occurs. The species composition at a new hydrothermal vent site may be controlled by the environmental conditions including depth and fluid temperature and composition as well as by the ability of animals to migrate to the new site. We will image and sample benthic biological communities in the carbonate chimney habitat to document the potentially striking differences in species composition between this and black-smoker habitats to the north and south of Pescadero Basin. We expect to find species new to science and possibly functionally similar to those found at Lost City, where biomass is low, but biodiversity is high relative to black-smoker systems.

(Escobar Briones, Gaytán Caballero):
Descriptive ecology of vent fauna by:
Describing the infaunal community structure and megafaunal composition from sediment samples and organisms. Describing habitats based on the continuous video, video transects, and images.
Describing the macrofaunal and megafaunal community along a gradient of influence from chemosynthetic locations to non-chemosynthetic sites
Describing ecosystems based on qualitative samples.
Generating a reference collection of megafaunal HD images. The megafaunal priority groups were anemones (Actinaria) for molecular and symbiotic analysis, taxonomy and molecular analysis for the Orophorhynchus artificial cluster of actual Munidopsis genus. 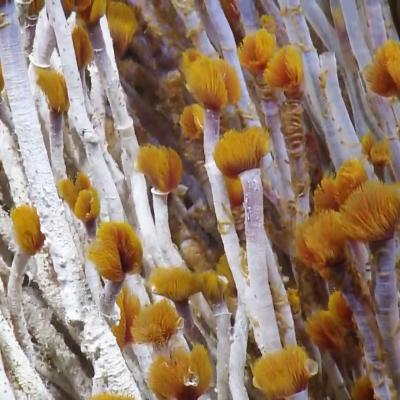 In 2015, the deepest high-temperature hydrothermal vents in the Pacific Ocean were discovered in the Pescadero Basin of the Gulf of California. Initial observations revealed enigmatic aspects of this vent system, including unique mineralogical composition and fluid geochemistry, suggesting that there is much to be learned about deep ocean carbon dynamics in this system. 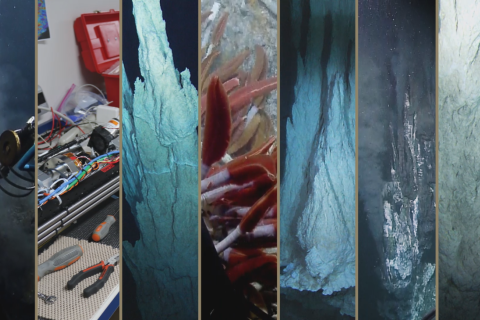 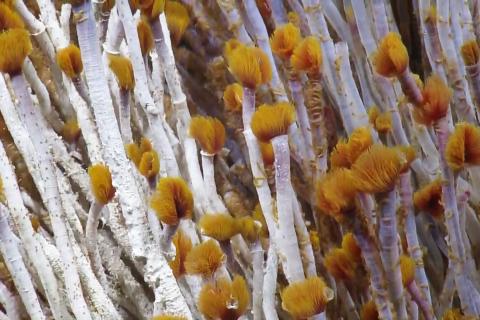