Seafloor Mapping Along the West Coast

Only about 13% of our world’s oceans have been acoustically mapped. Continuing to map priority regions identified by our research partners, the Nautilus Exploration Program is helping to fill in some of these gaps in seafloor maps with the West Coast Mapping expedition from September 12-30, 2017. Meet our team of mappers, navigators, engineers, and scientists led by Expedition Leader Dr. Emil Petruncio who will be working with our Scientists Ashore to identify priority regions and collect this foundational data that will help guide future exploration.

Revealing Secrets of the Seafloor

E/V Nautilus is equipped with a multibeam sonar and sub-bottom echosounder to collect bathymetric, sediment and geological characterization, and water column data--helping researchers better understand the landscape and makeup of targeted seafloor regions. These types of seafloor mapping data are especially useful for our team for identifying areas or features of interest and creating bathymetric charts for ROV dive planning and situational awareness.

During this expedition, the Nautilus team will map priority areas on the west coast of the United States, including the Cascadia Margin along the Oregon-Washington border, the Channel Islands National Marine Sanctuary, and the southern California borderland. Using the EM302 multibeam echosounder and Knudsen sub-bottom profiler installed in the hull of Nautilius, the ship will start this expedition by mapping parallel along the coast after leaving port in Astoria, Oregon. This mapping will be focused on locating seeps in the area known to have seafloor methane instability along the Cascadia Margin and for exploratory seep mapping off of California’s coast. Last year, the Nautilus team discovered over 500 methane seeps in the Cascadia Margin region, conducting mapping surveys and collecting samples and imagery with ROVs Hercules and Argus.

In addition to searching for bubble streams of active seeps, several days of the expedition will also focus on surveying within the National Marine Sanctuaries and outer California borderland, especially Channel Islands National Marine Sanctuary. Many of the targeted regions fall within sanctuary management but are poorly-known, so the purpose of this surveying effort is for general bathymetric data collection and seafloor characterization. Mapping efforts will target regions with over 100 m depth to efficiently map previously-unsurveyed areas or areas with low resolution data.

Learn more about the mapping technology aboard E/V Nautilus. 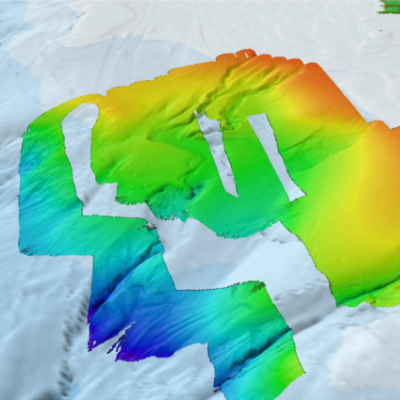 Only about 13% of our world’s oceans have been acoustically mapped. E/V Nautilus is equipped with a multibeam sonar and sub-bottom echosounder to collect bathymetric, surface sediment characteristic, subsurface geology and water column data. Satellites equipped with altimetry sensors have also been used to derive the bathymetry of the entire seafloor by sensing gravity anomalies of the sea surface that can be linked to topography (e.g.