Guide to the GISR Dives: What Does THAT Do?

During the GISR (Gulf Integrated Spill Response) dives, the science team and ROVs are diving on natural methane seeps emanating from the sea floor. Many of the seeps we’ll be diving on this week are known seeps that scientists who study natural hydrocarbon seeps have studied for some time.

Just like the brine pools that we visited on our last dives, scientists love to return to sites over and over because they can develop a baseline of samples and already have an understanding of what to expect, to better plan their resulting experiments and sample collection.

During these dives, the team is taking many different measurements with a variety of instruments. Below is a brief guide to what you’ll see during the dives this week, and what each instrument is designed to measure. While these instruments have been thoroughly tested in labs on shore, for many of them this is their first “sea trial.” The instruments themselves are being tested!

To learn more about the general research being conducted, read our GISR overview, or watch the GISR in 60 Seconds overview video.

The high definition TAMU (for Texas A&M University) cameras mounted to the front of Hercules allow scientists to image the bubbles at the methane seep in extreme detail. The main goal of the cameras is to determine whether they have a hydrate “shell” or skin on them, a hard layer of ice and methane that forms around gas bubbles at certain pressures and temperatures.

There are two cameras mounted side by side in order to get stereoscopic views of the bubbles and determine the size and shape more easily in the field.

The goal of the IGS is to collect a bubble sample at the source and then maintain it at the water pressure it was collected all the way to the surface and the lab. By maintaining the pressure, you keep the gas inside the fluid until you can get it to the surface and extract it. It’s important to get the composition of the gases at the source where they’re coming out of the seafloor as Methane and other hydrocarbons have the potential to dissolve at different rates within the water column.

Originally designed for hydrothermal vents, they are constructed of titanium and have to be able to withstand the internal pressure and the external pressure. There’s an inert gas on the inside when they go down empty.

They also simplify the gas extraction process when they reach the surface. Scientists pump water in one side to keep the fluid inside the tube under existing pressure, so you can continuously take small sub samples.

These exact IGSs were used to take the only direct sample from the Deepwater Horizon oil spill. Read about that expedition at WHOI’s Oceanus website: http://www.whoi.edu/oceanus/feature/a-small-sip-from-a-big-gusher

This system allows for the sampling of water and the gas contained within in it directly from the seep site. It is used for measuring dissolved concentration of methane and other substances in the water.

There are a row of water sample collectors known as Niskin Bottles along the port side of the ROV Hercules. Water is collected in them at various points during a dive, and then samples are taken when the vehicles return to the surface for further study in the lab. On these dives, scientists are looking at nutrients, salinity, dissolved particles, etc to develop a “density profile” of the surrounding water.

During one of the later dives, we will release a fluorescent dye at the base of the bubble plume and track the bubbles all the way up to the surface using a fluorometer mounted to the frame of Hercules. This will allow the scientists to better see the rate of dissolution of the bubbles into the water column. The fluorometer is mounted to the front of Hercules above the cameras, and therefore cannot be observed underwater.

An additional sonar device has been mounted to the frame of the ROV Hercules to provide additional sonar scanning and readings that will better detect and track the bubble plumes in the water column. 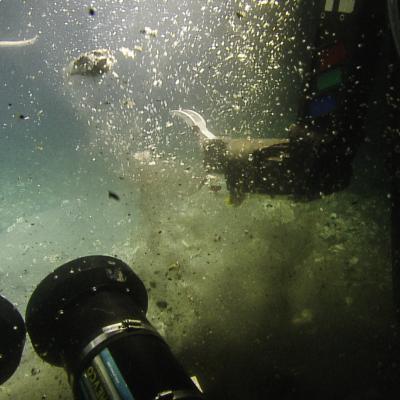 This cruise is part of the Gulf Integrated Spill Response (GISR) Consortium, funded by the Gulf of Mexico Research Initiative (GoMRI). The vision of the GISR Consortium is to understand and predict the fundamental behavior of petroleum fluids in the ocean environment. This capability is critical to inform decisions during response to oil spills and for development of mitigation plans, ultimately yielding significant environmental and financial savings. 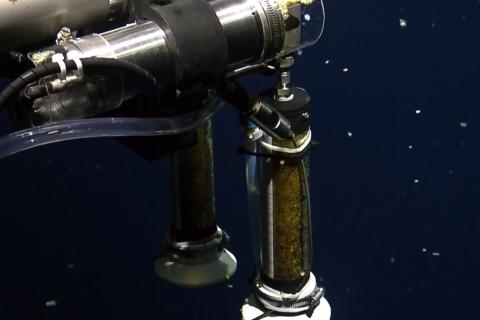 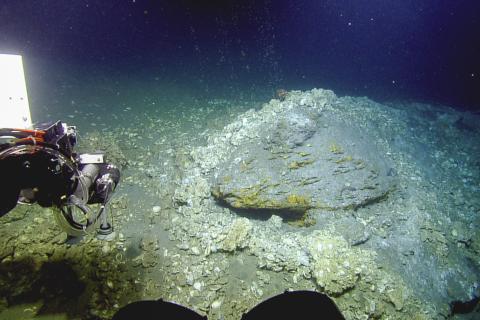 GISR Introduction: Where Will the Oil Go? 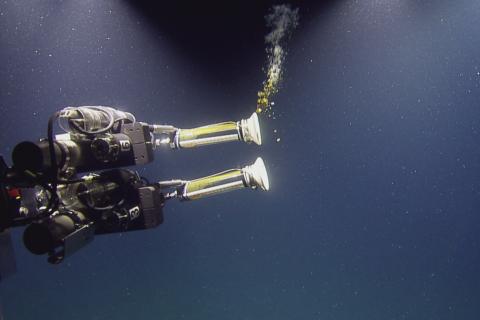