The team spotted this Stubby Squid off the coast of California at a depth of 900 meters (2,950 feet). The stubby squid (Rossia pacifica) looks like a cross between an octopus and squid, but is more closely related to cuttlefish. This species spends life on the seafloor, activating a sticky mucus jacket and burrowing into the sediment to camouflage, leaving their eyes poking out to spot prey like shrimp and small fish. Rossia pacifica is found in the Northern Pacific from Japan to Southern California, most commonly seen up to 300m deep, but specimens have been collected at 1000m depth. 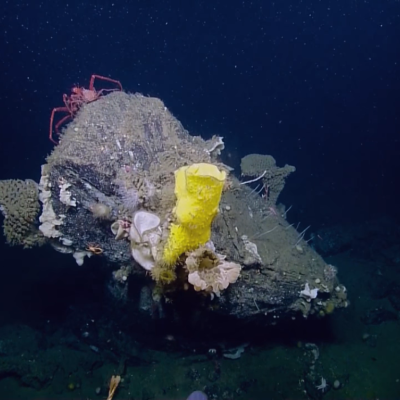 In late summer, E/V Nautilus will be offshore Los Angeles to explore some of the most tectonically active (as well as densely populated) areas offshore California. The team will investigate the Southern California Margin, a broad area that fits entirely within the US Exclusive Economic Zone but that still remains largely unexplored. The margin is a heavily trafficked area and has been investigated for over 50 years, by the academic community, federal agencies, military, and petroleum and fisheries industries.